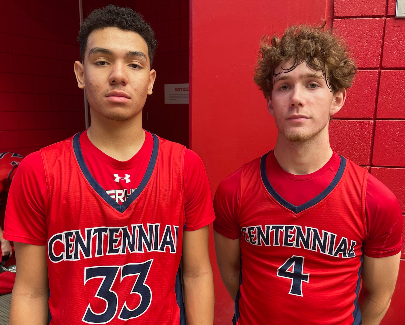 The Centennial High School basketball program is definitely on the rise and in position to win a 5A State Championship next high school season, as the program will be returning the majority of last year's team that had a terrific season in 2021. During the shortened season, caused by the COVID-19 pandemic, Centennial had their best season - finishing with an impressive 18-2 overall record on the season. Last year's team lost to 5A State Champion Catalina Foothills in the 5A state final, 59-45. Centennial's performance throughout the summer (June) in numerous leagues and events, including the Section 7 event, proves that next season's Centennial ball club is primed and ready to win it all next season (2021-2022).

It has been a team in the making, as Centennial Head Coach Randy Lavender has gone young for some time - developing his young program into a strong title contender over time. Lavender has done it the right away, developing his players and his team at the right pace. The team has developed into exactly what he and his staff had prepared for, as the team finished 18-11 during the 2019-2020 season, and then finished as state champion runner-ups last season. This up-and-coming season, the team will be prepared to win it all, and has the talent, depth and teamwork to do so.

Centennial only lost (3) seniors from last year's team, so they will return just about everyone next season. The team will be led by the strong play and leadership of gifted 6-foot-1 senior guard Jake Lifgren (pictured right). Lifgren is one of the state's most underrated guard prospects, and will be making a nice jump in our next 2022 Player Rankings. Lifgren is coming off a junior season where he led Centennial with impressive numbers - averaging 21.9 points, 3.4 assists, 4.6 rebounds and 2.9 steals per/game. He was one of the elite performers in the state last season, and should have just as good a season as a senior, although defenses will be keying on him. His numbers were glaring and terrific, and proved that he is among the elite guard prospects in Arizona's 2022 Class. Lifgren is a very skilled and fundamentally sound guard prospect with a strong handle of the basketball and a pure shooting stroke that allows him to make shots with range and under duress. He is a flat out pure scorer of the basketball and is a strong driver and finisher in the lane. This young man has been underrated throughout his high school career, but no longer. He is well deserving of college scholarship offers from all levels, and I look forward to seeing his college recruitment develop over the next few months.

The Centennial team is deep, so Lifgren won't need to put up huge numbers next season. His numbers could even drop some, as he will have loads of help on this talented team next season.

Providing excellent support and depth will be hard-working 6-foot-4 junior wing Emery Young. Young (pictured left) had his best high school season last year, averaging 10 points and 6.8 rebounds last season as a mere sophomore starter. He will definitely add to those numbers next season, and will be older, better and able to provide serious support for Ligren next season, which will keep defenses honest. Young is a good offensive weapon that is capable of scoring inside and out, rebounds hard and is a strong defender that accepts challenges for the betterment of his team. He will have a true breakout season this year, as seen by his improved play throughout the summer. Young is one of the state's top 2023 prospects, and has had a strong summer showing - suggesting that he is ready for the prime time now. Also a fine young man that absolutely loves the game, and has put in the work. It is his time.

Skilled 6-foot-2 senior guard Trenten Lavender will also be a major factor for next year's team. The son of the coach, Lavender has a high basketball IQ and is also coming off of his best season - averaging 11 points and 3 rebounds per/game, but shooting an impressive 44% from the field and 43% from three-point distance. Lavender will also raise his overall numbers next high school season, and provide excellent depth and support for next year's team. Another very good prospect for a smaller college program and a player on the rise.

The team also has much more depth provided by 6-foot-1 senior Abe Rangel, 6-foot-4 sophomore Gage Galbreath and 6-foot-11 junior post Christian Depue. Depue will provide excellent size and I have been very impressed with his play as of late. A major sleeper in Arizona's 2023 Class with excellent length and size.

6-foot-4 senior forward Jayson Petty was terrific also last season - averaging 19.3 points, 7.3 rebounds and 2.4 steals per/game as a junior. Unfortunately for Centennial, Petty chose to leave the program for the prep school ranks, and will suit up next season for PHH Prep. Petty is an athletic forward prospect that rebounds and defends hard, and plays with good intensity and willing to guard anyone on the floor. Petty will be surely missed next season at Centennial, but the team will be just fine.

The Centennial team and coaching staff has prepared for what is coming for several years, and now they look primed and ready to make even more noise next season. The 5A Division will be challenging, as there are many programs in the Division that will be ready next season to also make an impact in the Division, but the depth and experience gained by Centennial last season, as well as the leadership provided by Lavender and his staff, should have this program much happier in 2022 than they were at the finish of the 2021 season.