Caspian Jones On Another Level in 2025 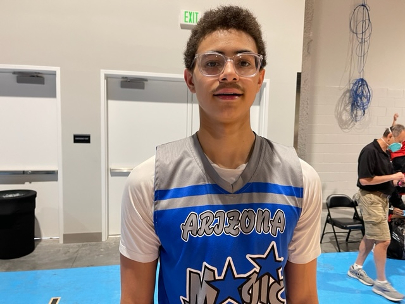 Arizona's 2025 Class of prospects is absolutely loaded with some elite talent that has already made an impact at the varsity level around the state. One member of the class that has loads of promise and potential is Phase 1 Academy 6-foot-6 freshman forward Caspian Jones. The Phase 1 basketball program is a local prep program based in Gilbert, Arizona, that has ties to Canada and develops prospects for college athletics. Caspian Jones is one of the elite young prospects in the program, and also among the top overall 2025 prospects in the state.

While there are numerous elite prospects in the 2025 Class that are worthy of serious attention, Jones is a glaring prospect in the class, as a result of his sheer size and physicality at a very young age. Already standing 6-6 in height, Jones is a sure-fire talent and prospect for the future, and is having a very good freshman season against much older competition. Jones is still growing a great deal, but already has a much older looking physical frame with excellent physical strength and agility already, and he will only continue to grow immensely over the next three years of high school. This young man has the potential to grow another 4 - 6 inches in height and continue to get much stronger physically over time - a thought that suggests he will eventually grow into a 6-10 or 6-11 post player with a nice overall skillset that he has worked hard to develop.

I have seen Jones numerous times throughout his development and have marveled at the immense improvement that he has made over the past two years. He has improved almost each time I have seen him play, and I am sure this young man, with continued hard work and focus, will develop into a serious high-major Division-I prospect as he continues to mature and develop naturally.

Jones has worked hard with top-rated local trainer Chris Hurst over the years, while growing up in Southern Arizona. His father Kenny was a very good player himself and he has a lot of true size in his family, which can only be a good thing for the young Caspian Jones, and is why he is so much bigger and stronger than many other current 2025 prospects in the state.

Jones has always been a post player, due to the fact that he is simply bigger than his classmates, and throughout the process, he has developed a very good offensive skillset that allows him to play inside and out. He is a good shooter of the basketball with a soft touch from the perimeter, but plays big and likes to score around the paint and from mid-range. He is capable of stepping out to the perimeter and making shots with range, but will need to continue to improve this range over time to become much more effective from longer ranges. He is a strong rebounder already on both ends of the floor, and will continue to improve in this area also, as he continues to mature physically and gets even stronger and more athletic with natural maturity. He is a good finisher around the basket currently also, and will continue to develop in this area as well as he develops. He runs the floor hard from block to block, and can score in the open floor. He is also a good post defender that is also capable of guarding smaller perimeter players on the perimeter.

The sky is the limit for this young man and he is clearly a top-rated prospect among the 2025 Class, and will make a nice introduction in our new 2025 Player Rankings that will soon be released. This young man will also become one of the hottest recruiting targets in the 2025 Class over time, and I expect him to receive loads of college recruitment over time.

I will continue to watch Caspian Jones continue to develop as a player and a college prospect, and bring you updates on his recruitment and development as a player over time.