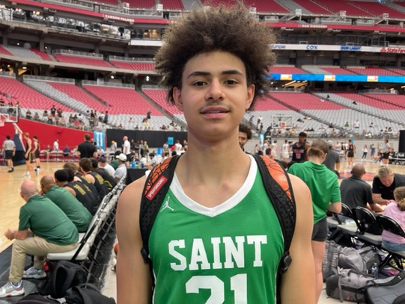 As we continue to look at some of the top prospects in Arizona's 2025 Class, in preparation for our release of our new player rankings, another top-rated prospect that is beginning to come into his own is St. Mary's High School's talented 6-foot-7, 215-pound sophomore forward Caspian Jones. Jones is coming off a strong fall performance for himself and is looking to become one of the top overall prospects in the 2025 Class. Jones has developed as a player a great deal over the past two seasons, and is now looking to help his Knights have a strong season in 2023.

Jones has overcome a lot as a young prospect, as he has worked very hard on his body and individual game to become the player that he is today. After once being very thin physically and wearing glasses/goggles as a youngster, Jones worked very hard in his own time to become a player that his friends and teammates could look to for production. After gaining serious size and strength on his once thin frame, and dawning the goggles, Jones is now a serious college prospect with excellent promise and potential for the future.

"Kids used to make fun of me," said Jones. "I worked hard to just become better than them."

Jones had a breakout performance this fall at the exciting Pangos All-West Frosh / Soph Camp in California, where he was a force amidst top-rated competition from the 2025 and 2026 classes. Jones would earn a Top 25 All-Star Cream of the Crop selection for his play in the event, and walk away from the camp as an elite prospect for the 2025 Class in the West.

Jones had a strong freshman campaign last season, playing major minutes for Phase 1 Prep Academy, and playing major minutes against stiff competition and performing at a high level. Jones decided to transfer to St. Mary's High School this summer, for an opportunity to have a high school atmosphere. While he is still transitioning to the move and looking to find his role with a St. Mary's line-up that is led by the overall play of star junior guard Styles Phipps, Jones will soon settle in and find his fit in Head Coach Damin Lopez's offense. While he plays much more in the post for the smaller St. Mary's lineup, this young prospect has shown that he has excellent versatility as a player, and can do a lot with the ball in his hands as well.

Over time, Jones plans to see his time as a small forward prospect with the ability to make plays for himself and others off the dribble. He enjoys having the ball in his hands and creating off the dribble, while being able to make shots from the perimeter with a nice shooting stroke. He has a very good handle of the basketball that he has developed through hard work, and is much more effective as a scorer when he is able to do so, which he showed this summer and fall. He is an active rebounder and finisher around the basket, and also runs the floor very well and looks to get easy buckets in transition. He is a very good and willing passer that sees the floor, and competes hard. He has excellent toughness at such a young age, and should blossom nicely over time with continued work ethic and hard work on his craft.

Jones has had a slow start to his sophomore season due to an injury and sickness, but he is looking to have a big sophomore season for the Knights, as he now looks to round into physical shape and get fully healthy doe a strong playoff push in 2023.

Jones' nickname is "Cash" and he has his own clothing line of shirts to go with it. He has a tremendous pursuit to become a top-rated national prospect over time. If he continues to work as hard as he has in the past to get to where he is today, then he will have no problem making his dream a reality.