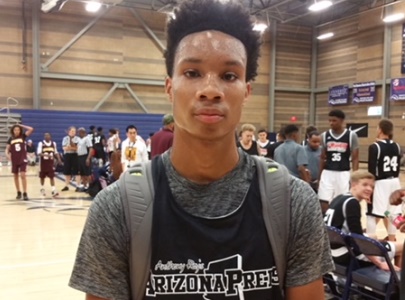 The 2017 McClintock Holiday Shootout kicked off on Tuesday with numerous games on the day, but the event saved the best for last in the evening, as the top-rated team in this year's event, Mountain Pointe, faced off with a game Mesquite HS team.  Mountain Pointe (12-1) has been among the hottest teams in the state, after an early-season loss to Brophy Prep.  The Pride recently handed a loaded Desert Vista team a loss at Mountain Pointe, and came into Tuesday evening's match-up with Mesquite as winners of their last 7 games on the season.

Mesquite (10-4), led by first-year head coach and former Arizona basketball legend Carlos Artis, would look to earn the big upset, and would, flat out, give a defensive-minded Mountain Pointe team all they could handle in the contest.  Mesquite led by the consistent play on the night of 6-foot-3 senior guard David Exline and 6-foot-5 junior guard/forward Kingdom Artis, would give Mountain a big scare early, as they would lead their team to a nice 34-23 halftime lead over the Pride.

After a third period where Mountain Pointe would close the gap, 49-43, behind the strong offensive effort of 6-foot-4 senior guard Amarion Cash.  Cash would continue his very strong play in the fourth period, as he would turn it up late - scoring from three-point range, in transition and at the free-throw line.  With 2 minutes remaining in the game, Cash would give Mountain Pointe their first lead of the game, 65-64, after he would knock down a three-pointer from the corner in transition.

Mountain Pointe 5-foot-9 junior guard Khalid Price would contribute 20 points in his team's win, with some tough hard drives to the basket, while 6-foot-5 senior forward Ryan Pete would finish with 15 points.  Mesquite's Kingdom Artis played an excellent game on the night and finished with 20 points in the loss, while distributing the basketball to open teammates in fine fashion all game and showing strong versatility.  David Exline proved just how tough he is to defend and came up big with a team-high 23 points in the defeat.

While Mesquite would fall short late, after leading much of the entire contest, they would prove just how serious a contender they really are this season.

Scouting Notes:  Mesquite was without the services of talented 6-foot-2 senior guard Jaden Lee in the contest on Tuesday evening due to personal reasons . . . Mountain Pointe was without the services of 6-foot-9 junior post Jalen Graham in the game on Tuesday evening, also due to personal reasons . . .Gilbert HS 6-foot-7 sophomore forward Griffin Lamb has unlimited upside and potential as a college prospect.  The long, lengthy forward is just beginning to grow into his young frame, and has excellent potential for the future.  He runs the floor very well and is able to make plays around the basket with his superior length.  He is definitely one prospect to watch closely for the future . . .Gilbert HS 6-foot-1 sophomore guard Brycen Long is an excellent shooter of the basketball with a quick release, and a fundamentally sound approach to the game.  Long has good potential for the future and looks to be a nice prospect for a smaller college program over time . . . While Tempe struggled against Gilbert on Tuesday evening, 6-foot-1 senior guard Naseem Vigil, the son of former State Player of the Year Doug Vigil, is a skilled guard prospect with a nice feel for scoring the basketball, combined with a nice handle of the ball.  A good sleeper prospect for a smaller college program.