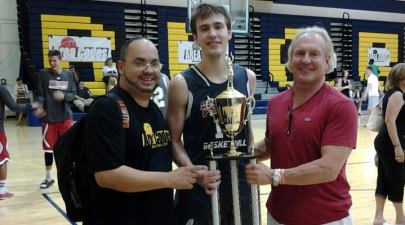 This weekend, the Adidas Area Codes Elite 8 Invitational was held in Phoenix, Arizona.  The event was organized by local tournament director Chad Groth and Etop Udo-Ema of the Compton Magic (CA) club program and also the Full Court Press.  The event featured many of the state’s top club teams and also some top-rated club programs from southern California, Nevada and Colorado.

The Arizona Power Black 17U team, which features many of the state's top 2014 prospects, would win this year's featured and top 17U Super Pool Division for the event – defeating Compton Magic Select (CA) in the championship game.  The Arizona Power Black 17U team would by led in the event by the play of Tournament MVP, star 6-foot-3 junior Casey Benson of Corona Del Sol HS.  Benson would turn in yet another strong performance for himself and earn the MVP award after the event.

Benson, the state’s top point guard prospect and among the elite prospects in Arizona’s loaded 2014 class, averaged 20.7 points, 3.3 assists and 1.4 steals per/game this past season.

Benson is among the best prospects in the state, regardless of class, and, as a result, has generated almost double-digit division-I offers already for himself, including high-major offers from such schools as Arizona State, Oregon, Colorado and Boston College.  Benson also has received a recent offer from Creighton University as well.  Benson’s pure ability to run a team and make players around him better makes him the best point guard prospect in the state, regardless of class.

With Arizona State recently acquiring a commitment from another 2014 point guard prospect, it will now be very interesting to see where Benson lands for college, as he plans to make a commitment for himself after his play throughout the summer months. Benson will also look to garner much more recruiting interest this summer, after his play on the summer AAU/club basketball circuit.

Congratulations to Casey on leading his team to the tournament championship this weekend.  Arizona Preps will continue to follow Benson's college recruitment this summer and bring you any updates as they begin to develop.