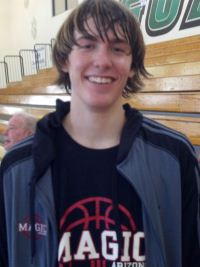 Corona Del Sol High School's 6-foot-2 ultra-talented sophomore point guard Casey Benson has been on a tear in a short period of time thus far in his high school career.  This year's recipient of the 2012 Arizona Preps Player of the Year award, Benson has seen his college recruitment begin to really pick up steam early.

After already possessing two division-I scholarship offers from Arizona State and Boise State before the spring evaluation period, Benson picked up another offer from the University of Colorado recently, and this week has reeled in another scholarship offer from a high-major program in the Athletic Coast Conference (ACC).

This week Benson received an offer from Boston College - raising his number of division-I scholarship offers now on the table to four.  Benson also has an offer from Grand Canyon University as well.

Benson was recently selected as the Tournament's Most Valuable Player from the 16U Division at this year's Double Pump Hoop Fest tournament in California, as he led his Arizona Magic Pump N Run-2014 squad to the championship of this year's event.  Benson was terrific in this year's event, as he flat out came of age - leading his team to several big wins in the event, including a nice 14-point win over the top-rated Oakland Soldiers.  Benson has come into his own a great deal over the past year, and he grew up right before our eyes in this year's event.  Benson made every big shot down the stretch, but also also provided unique leadership and veteran handle of the basketball in the event - making his teammates better and providing a refuse-to-lose attitude in the event.

Benson is coming off an excellent sophomore season where he led his Corona Del Sol High School boys basketball team to this year's 2012 Division-I State Championship, after a big 66-53 championship win over Cesar Chavez HS.

Benson also helped lead his Aztecs to the 2012 Section-I Championship, as the Aztecs only lossed one game on the season - compiling a very impressive 32-1 record on the season in the state's top division.

Benson averaged 15 points, 4 assists and 4 rebounds per/game on the season.

Benson advised me that he is taking his time in making the right decision for himself, and that he will take his time in reaching his decision.  Benson is still undecided as to whether he will decide early or wait until his senior season to reach a decision in his college recruitment.

Benson is among the top overall talents in the state and is currently regarded as the state's top prospect in Arizona's very talented 2014 class.  He has become one of the state's elite-level talents and will see his share of college recruitment at the highest level.

Arizona Hoop Review Scouting Report: Benson is a throw-back point guard prospect with a superb feel for the game - making him a definite true point guard prospect.  Benson loves to have the basketball in his hands and definitely under high-pressure situations, where he is able to make plays for himself and others.  Sees the floor at an advanced level and pushes the basketball up the floor and to the open teammate.  A left-handed shooter of the basketball, Benson is ambidextrous with the basketball and likes to use either hand to make plays and passes of the ball.  An excellent shooter with range, Benson shoots a very high percentage on the floor and takes his time to make the right play.  Often regarded as the best pure basketball prospect on the floor, Benson competes at a high level and enjoys competition.  A gym rat, Benson has excellent work ethic and works on his game a great deal with a personal trainer and takes very good carer of his body.  A very good on-the-ball defender with excellent anticipation and court awareness.  A high-level prospec that has a true position and will be able to play anywhere he wants to when it is all said and done.