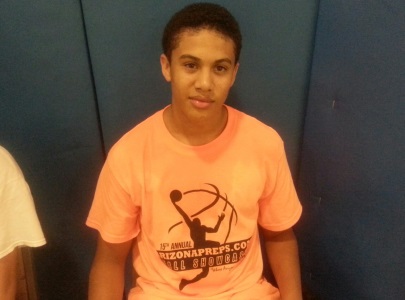 Another one of the state's top senior prospects is now off the recruiting board, as Queen Creek High School's talented 6-foot-2 senior guard prospect Carter Wilson has found a quality home for himself in the Golden State Athletic Conference (GSAC), and he didn't have to go too far to do it.

After looking over his options, Wilson has given a verbal commitment to Arizona Christian University, a local NAIA basketball program that is on the rise.  Head Coach Jeff Rutter and his men's basketball staff showed early recruiting interest in the talented guard prospect, and were able to convince him to get it done before the spring evaluation period.

Wilson turned in a strong spring and summer performance for himself last club season, while playing for Justin Allen and his Arizona Magic-Passion For Ball club team, and his hard work paid off.  Wilson proved that he could score the basketball at a high rate against quality competition - possessing a sharp shooting stroke and good size for both guard positions on the floor.  Wilson is a good-looking shooting guard prospect that has an excellent perimeter jump shot.  He is at his best when scoring the basketball, and also has a good feel for the game.  He pushes the ball up the floor and is a good ball handler and passer.  Wilson plays with very good intensity and loves the game.  A good looking sleeper prospect for a smaller college program.

Wilson will see his time primarily at the shooting guard position in college.

This season, Wilson has helped lead Queen Creek High School to a strong 17-7 overall record this season in the Division-II Class.  Wilson has averaged 14.4 points, 4.8 rebounds and 2.6 assists per/game for a talented group that could compete for a state title this season - giving head coach Troy Gibson his best chance for success.

Congratulations to Wilson and his family on this amazing accomplishment, as he played himself into becoming a serious college prospect.  Our staff here at Arizona Preps is very proud of his hard work - on and off the basketball court.