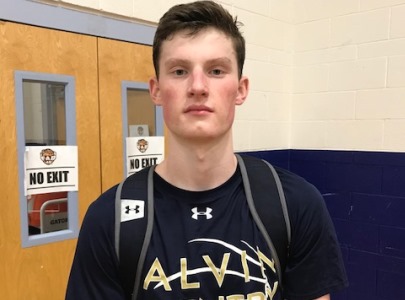 No player helped themselves more this summer with their performance more than Arcadia High School's 6-foot-4 sharp-shooting senior guard Carter Murphy.  After entering the club season with no offers, the hard-nosed gifted and skilled prospect shot the lights out this club season en route to earning numerous scholarship offers for himself.  Recently, Murphy decided that he had found his fit and gave a verbal commitment to a Mountain West program.

Very few prospects in the state, at any class, saw their recruiting stock take off more this summer than Murphy, as he earned scholarship offers from South Dakota, Hartford, Northern Arizona, Army West Point and Air Force.

After thinking things over this August, just after his terrific summer performance, Murphy decided to pull the trigger with Air Force, where he will play before attending the Air Force Academy after his school commitment.

Murphy is a tough, hard-nosed guard prospect with a pure shooting stroke with unlimited range and a quick release.  His physical nature and approach to the game suggests that he will be a perfect fit for the Air Force program, and made a good decision for himself.

It is now an exciting time for Murphy, who will sign with Air Force now during the NCAA fall signing period.  The past year was a rocky one for Murphy though, as he left Arcadia High School after his junior season to attend CGM Prep Academy.  But Murphy's stint as a player for CGM Prep would not last long, as the program would get shut down in the second semester of the school year.  At the end of the junior season for Murphy, he would decide to return for his senior season back to Arcadia, where he will now pick up his final senior season.

The year of individual skill development and increased competition while partially playing for CGM Prep, really raised Murphy's game to another level.  He displayed his shooting prowess and mental toughness this spring and summer while playing for and leading his club program, Alvin Gentry Elite.  While playing for the team and terrific head coach Amp Lee, Murphy absolutely flourished.

Congratulations to Murphy and his family, the Alvin Gentry Elite program and the Arcadia High School program on thsi impressive accomplishment from our staff here at Arizona Preps.

Arizona Hoop Review Scouting Report:  Murphy is an extremely skilled guard prospect with good size and length.  He has a strong frame for his size and is a no-nonsense performer that is a serious competitor that always wears his game face.  He is an excellent shooter of the basketball with unlimited range on his shot and a quick release.  He is among the best pure shooters of the basketball in America, and will improve a team's ability to make shots immediately.  He loves the three-point shot, but also has a solid mid-range game as well, and is capable of making plays inside the arc for himself and others.  He is a good ball handler and passer, and can see time at the point position when needed, but only in certain situations.  He is an active defender that uses his hands to deflect passes.  Has good lateral quickness.  Fundamentally sound.  A good rebounder with good size.  Will only continue to improve as he adds some more strength and size to his thin frame.  An excellent sleeper prospect.