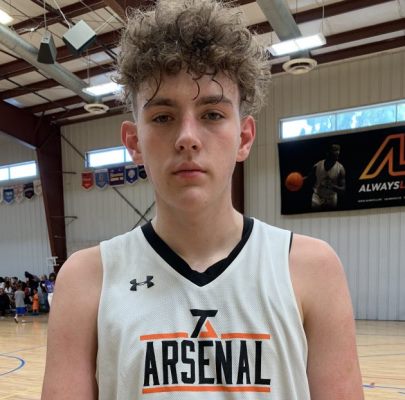 In very surprising fashion this week, one of the elite prospects in Arizona's 2021 Class decided to pull the trigger early and give a nice verbal commitment to a college program. Sunnyslope High School's 6-foot-10, 220-pound junior post Carson Basham, while having a laundry list of offers for himself, decided to end his college recruitment and give a verbal pledge to Pepperdine University and Head Coach Lorenzo Romar and his strong basketball staff.

While the previous plan might have been to play through the spring and summer months before making his college decision, the COVID-19 pandemic may have seriously changed the plans for Basham, who likely will not get an opportunity now to play in front of college coaches or even play this summer, as a result of the virus. As a result, it made sense to elect for the program that was the best fit for him, without waiting any longer.

The Pepperdine staff did an excellent job in reeling in Basham, who possessed numerous offers for himself, before making his decision.

After a solid junior season for Head Coach Ray Portela, Basham took his game and his college recruitment to another level over the past year, and became one of the hotter prospects in the West among the 2021 Class. Basham had planned to play this spring and summer for Russell Westbrook's California-based club team, Team Why Not, a heavily-sponsored Nike program. Basham now will return for his senior season as one of the elite talents in the state, and look to lead Sunnyslope to a 5A State Title next season, as the Vikings will return a very loaded group of players and prospects.

Basham averaged 9.8 points and 6.4 rebounds per/game last season, while also averaging 2 blocks per/game as a junior, while helping lead Sunnyslope to a 23-6 overall record on the season.

Basham's overall numbers have been modest, while on a very talented but young Sunnyslope team that has looked to develop an identity over the past two seasons, after the recent and past success of a veteran Vikings' lineup that took the team to several straight state title appearances. Basham emerged as a nice looking post prospect and showed excellent promise and glimpses of a gifted post prospect for the future. His best years are well ahead of him.

Basham is a very good developing post prospect for the future, and he has a nice overall skillset already that will only develop with physical maturity. He has a nice ability to block shots with good timing, keep the basketball up high for put-backs, rebounds well, runs the floor very well for his size and has a nice overall offensive skillset with a soft touch from the perimeter. Basham is still very young and is just beginning to grow into his large frame. Over time, and especially the next two years, he will see his body change a great deal, as he matures physically. He does enough on the floor now to give you a good glimpse in his future.

Pepperdine absolutely got a steal with Basham, especially this early in the recruiting process. He should have a fine career in the West Coast Conference, over time. Congratulations to him and his family on this commitment and his future.

Arizona Hoop Review Scouting Report: Carson Basham is a unique find in the state of Arizona, as he has excellent physical size and agility, and an advanced skillset for his age - suggesting that he is only going to continue to get much better over time. He has a good approach to the game. An active rebounder and shotblocker with good timing. A good low post scorer with a good jump hook and low post footwork, and also an ability to step outside and make shots out to three-point range with a soft shooting touch. He runs the floor well and is a good finisher in transition. A fundamentally sound post player that has tremendous upside and has a very bright future ahead of him.