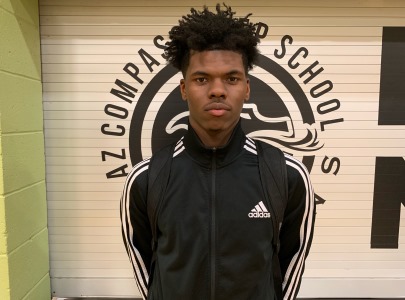 AZ Compass Prep 6-foot-5 senior guard Carlos Ramsey is one of the top unsigned prospects in Arizona's 2019 senior class.  Coming off a strong senior season for himself at AZ Compass, Ramsey is looking to generate much more college recruiting interest for himself this spring. While waiting to see where he will land collegiately and to raise his college recruitment, Ramsey decided, like many other top-rated Arizona unsigned senior prospects, to play through the spring before making his college decision.

Ramsey got off to an excellent start this spring, as he led played at a very high level this weekend in Irvin, California, at the Adidas Silver Gauntlet Qualifier.  In the event, Ramsey avergaed better than 25+ points per/game, and finished with an impressive game-high 38 points in the 17U championship game for the event - leading his Arizona Firestorm 17U Elite team, coached by Pete Kaffey, to the tournament championship.  For his exploits, Ramsey would have certainly been named as the Tournament MVP, if one was selected.

A native of Milwaukee, Wisconsin, where he attended Destiny High School, Ramsey moved to the state of Arizona this fall to attend AZ Compass for his senior season.

Currently, Ramsey has one scholarship offer to his credit from the University of Milwaukee.  While not many college coaches have either not seen him play as of yet, or have not focused on his play, Ramsey is a true talent with serious toughness and a tremendous desire to compete at a high level.  He is a nice division-I talent that should begin to garner much higher college recruitment this spring, especially now after his performance this weekend.  While division-I college coaches were not in attendance this weekend, there were numerous scouts and media in attendance that will get the word out about this weekend's performance by Ramsey.

Ramsey has also worked very hard in the classroom, and recently he received a passing test score on his college entrance examination, so he is now a full academic qualifier as well, which should raise his college recruiting interest as well.

Ramsey has a serious competitive spirit on the basketball court, making him an intense competitor.  He is a good shooter of the basketball with range, and also has a nice mid-range game that is set up nicely from his ability to make perimeter shots.  A left-hander, Ramsey has an unorthodox approach to the game - making him difficult to defend for opposing players.  He is also a very good defender that plays passing lanes, and also thrives while slashing to the basket and scoring in the open floor.  A very good overall sleeper prospect that is off to an excellent start for the spring.

Ramsey's exploits this weekend should work very nicely in his favor to attract more attention from college coaches.  Ramsey will now travel with his program April 26 - 28th to take part in Dinos Trigonis' Pangos Terrific 24 event in Marietta, Georgia.

I will continue to follow Ramsey's recruitment and performance during the spring evaluation period, and will look to update you on his college recruitment as it continues to unfold.

Arizona Hoop Review Scouting Report:  Ramsey is a native of Milwaukee, WI, and moved to the valley for his senior season this fall.  A left hander with good size for the guard position, Ramsey is a scorer and is a 2/3 prospect that is also capable of handling the point guard position at certain times in the offense.  He is a solid passer, but needs to see the floor better to take on or share the point guard responsibilities much more often - an attribute that would suit him nicely in his college recruitment and over time as a productive player.  Ramsey is a good shooter of the basketball with some range on his shot, but he is at his best from mid-range and off the dribble where he is able to finish strong at the rim over and around defenders.  He does not mind physical contact, and gets to the free-throw line as a result of his hard-nosed play and enjoyment in attacking the rim.  A good ball handler, especially in the open floor or while slashing to the basket.  A very good defender that enjoys playing defense, and accepting challenges of the opposing team's best player.  An active rebounder.  A good overall finisher.  A very good sleeper prospect with a high level of competitive drive and excellent toughness as a player.