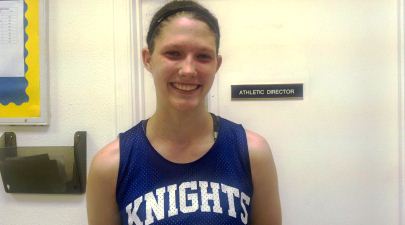 Tempe Prep 6-foot-1 senior guard/forward Camille Zimmerman is currently rated as our #3 overall prospect in Arizona's 2014 class. This week, while being sought after by numerous division-I programs across the country, Zimmerman made her college decision to bypass the heavy interest from many high-major division-I programs for an opportunity to play at a program from the Ivy League.
Share
Facebook Twitter LinkedIn WhatsApp Pinterest Email

One of the elite girl's prospects in Arizona's 2014 class has already had a very nice high school career, and will look to finish it off with a big senior season for herself.  Before the start to the 2013-2014 high school basketball season, there was some unfinished business by Tempe Prep High School's 6-foot-1 senior guard/forward Camille Zimmerman.

While being sought after by numerous division-I programs across the country, Zimmerman has made her college decision.  This week Zimmerman decided to bypass the heavy interest from many high-major division-I programs for an opportunity to play at a program from the Ivy League - giving a verbal commitment to head coach Stephanie Glance and Columbia University (NYC).

Zimmerman took several official recruiting visits, but, in the end, the lure to get a world-class education just too much to pass up for the talented girl's prospect.

"Columbia is a nice fit for Camille given her great Liberal Arts education from Tempe Prep, and her desire for a similarly challenging academic environment," said Camille's father, Jeff Zimmerman.

Zimmerman is among the state's most skilled talents and is coming off another big junior season for herself, where she ranked among the top individual scorers in the state - leading Tempe Prep to a 27-8 overall record on the season.  As a sophomore, Zimmerman helped lead her program to a very impressive 30-5 overall record on the season - winning the 2012 Division-IV State Championship.

Zimmerman made her case among the state's top girls prospects early on in her high school career, becoming a young starter for Tempe Prep head coach Nancy Calahan.  Last season, Zimmerman ranked among her team leaders in scoring, rebounding, assists and steals.

"We are very grateful to you (Arizona Preps) that you ranked her so high, and we know this gave her added credibility - especially coming from a Division-4 school," said Jeff Zimmerman.

Zimmerman is currently rated as our #3 overall prospect in Arizona's 2014 class.

Congratulations to Camille and her family on this amazing accomplishment for Arizona girl's basketball, and also smaller high school programs in the state.

Arizona Hoop Review Scouting Report:  Zimmerman is a talented and skilled performer that is able to play several positions on the floor - capable of playing inside or out.  She is very comfortable playing on the perimeter, since she has played the point guard position for much of her life - allowing her to play from the point position, shooting guard position or from the wing as a small forward.  She is at her best with the basketball in her hands, as she is able to find open teammates on the floor and has excellent court vision.  She has a very good handle of the basketball and is a fundamentally sound performer that make plays for herself or others.  She has a good shooting stroke with range on her shot and takes very good shots for herself, not forcing the action.  When left unguarded she is capable of making shots from three-point distance, and is capable of taking defenders off the dribble and finishing strong at the basket.  Her best asset is her mid-range game, which allows her to score effectively off one-dribble pull-ups, and make plays for cutters and open post players.  Zimmerman often sees plays before they happen - another nice attribute.  A good defender, Zimmerman has good lateral quickness and quick hands.  She plays hard on the defensive end, and is also a good shot-blocker for her size as well.  Also a good rebounder that is active on both ends of the floor.  She is a very well-rounded prospect.