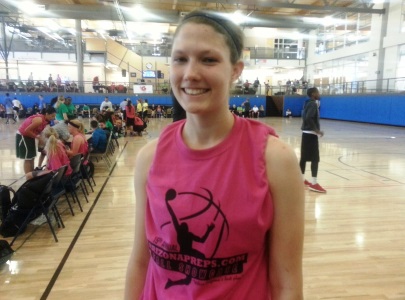 In last weekend's 15th Annual Arizona Preps Fall Showcase, there were numerous top-rated girls prospects in the event and many top performances as a result.  One of the elite performers in this year's event was Tempe Prep Academy's 6-foot-1 senior guard/forward Camille Zimmerman (Columbia University commit).  While turning in a runner-up Tournament Most Valuable Player performance in the event, Zimmerman proved her #3 overall ranking among Arizona's top 2014 prospects, while also making a strong case to be ranked even higher.

Zimmerman is fresh off a recent commitment to Columbia University, and still played in the event - looking to compete against the state's top competition before the start to the 2013-2014 high school basketball season.

Zimmerman is among the most uniquely talented prospects in the state - possessing excellent size and a unique skillset that allows her to play inside and out.  She has very good toughness as a player and is a competitor that loves the game of basketball.  She is only scratching the surface of just how good she can become, and I look forward to her continuing to develop a great deal over time and becoming one of the better college players in the country in the Ivy League Conference over time.

Zimmerman is among the state’s most skilled talents and is coming off another big junior season for herself, where she ranked among the top individual scorers in the state – leading Tempe Prep to a 27-8 overall record on the season.  As a sophomore, Zimmerman helped lead her program to a very impressive 30-5 overall record on the season – winning the 2012 Division-IV State Championship.

Zimmerman made her case among the state’s top girls prospects early on in her high school career, becoming a young starter for Tempe Prep head coach Nancy Calahan.  Last season, Zimmerman ranked among her team leaders in scoring, rebounding, assists and steals.

Zimmerman is currently rated as our #3 overall prospect in Arizona’s 2014 class, but I believe she could climb the rankings in our next release, like that of Xavier's Katie Werner last season - another Ivy League commit to Yale University.

Arizona Hoop Review Scouting Report:  Zimmerman is a talented and skilled performer that is able to play several positions on the floor – capable of playing inside or out.  She is very comfortable playing on the perimeter, since she has played the point guard position for much of her life – allowing her to play from the point position, shooting guard position or from the wing as a small forward.  She is at her best with the basketball in her hands, as she is able to find open teammates on the floor and has excellent court vision.  She has a very good handle of the basketball and is a fundamentally sound performer that make plays for herself or others.  She has a good shooting stroke with range on her shot and takes very good shots for herself, not forcing the action.  When left unguarded she is capable of making shots from three-point distance, and is capable of taking defenders off the dribble and finishing strong at the basket.  Her best asset is her mid-range game, which allows her to score effectively off one-dribble pull-ups, and make plays for cutters and open post players.  Zimmerman often sees plays before they happen – another nice attribute.  A good defender, Zimmerman has good lateral quickness and quick hands.  She plays hard on the defensive end, and is also a good shot-blocker for her size as well.  Also a good rebounder that is active on both ends of the floor.  She is a very well-rounded prospect.