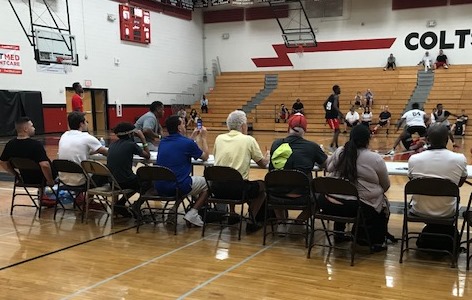 One of the best players I saw all day. Green possess nice offensive handles that compliments his explosive first step to the basket. Add those traits to his smooth mid-range jump-shot and you have yourself a talented offensive scorer. Green lacks no athletic ability, the soon-to-be Junior was all over the court making plays. One of his biggest strengths is getting to the basket in Iso situations. Lookout for TJ Green next season, this guy’s a player.

Scrappy, aggressive, and an all-around playmaker; a short description of Wollangk’s performance in the Underclassmen All-Star game. Wollangk took control of his offense with pure confidence, hardly ever making a mistake with the ball in his hands. He lasered in a no look pass to a back-cutting teammate for a beautiful assist, found wide-open teammates when double-teamed, and was absolute money with his mid-range jump shots. Wollangk got after it on defense as well. Wollangk has a 4.4 G.P.A., getting it done on the court and the classroom.

A fast and aggressive player. Thomas had quick hands resulting in steals and multiple fast-break points for his team in the Top 40 All-Star game. Thomas played great help defense and hustled every second he was on the court. Thomas topped off his outstanding performance knocking down a step-back jumper right in the face of a much taller defender.

Tall, long, and athletic, Van Hammond grabbed every single board that went near him in the Top 40 All-Star game. He dominated the paint offensively and ran a couple perfect pick-n-rolls finishing strong at the rim. Carter Van Hammond showed us why his name has been buzzing around the state this off-season.

One of the biggest players at the camp sure made his presence felt right at the Top 40 All-Star game. Sprinting down the court on a fast-break, Elliott received a pass just inside the free throw line, took two steps and slammed a powerful one-hand jam that rocked the gym. Elliott knocked down a couple mid-range jumpers and was also a big rim protector on defense, swatting down anything that was shot near him. Elliott looked fantastic at the camp.

Just an overall fantastic hustle player. Donaldson played some of the best defense at the camp, coming up with multiple steals and leading the fast-break charge down the court. Donaldson has tremendous vision, finding open teammates for assists consistently. Ran the pick-n-roll very well.