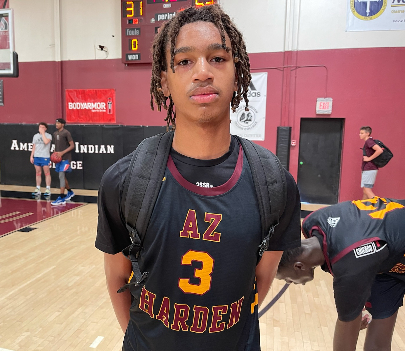 Arizona high school basketball will now have to wait for the introduction of 6-foot-5 wing Cameron Holmes, after Holmes released his decision to reclassify to the 2026 Class last week. Previously a 2025 prospect and preparing to enter his freshman season at Millennium High School this fall, Holmes and his family have made the decision to make the change to the 2026 Class. While already regarded as one of the elite prospects in the 2025 Class in the West, Holmes will now surely be rated among the elite 2026 prospects in the country.

For Holmes, this decision makes a lot of sense, since he is a very young prospect for his class, and his natural class was actually the 2026 Class. Holmes is still 14 years of age. The younger brother of one of Arizona's elite prospects over the last decade, DaRon Holmes (University of Dayton signee), Cameron has quickly made a name for himself - receiving Division-I offers. Holmes has not even played a true high school varsity basketball game yet, and is already one prospect that has already made a significant impact.

Holmes has not played a varsity game of high school basketball in the state, and already has received several Division-I offers from Kansas, Portland State and Utah State - a very impressive list of offers already, and for any class of prospect. This list of college programs will only continue to grow immensely for Holmes over time.

Unlike his older brother DaRon, Cameron is a left-hander and is a true wing prospect. At the same age, DaRon was already a little bigger and gravitated more to the paint, although he was very skilled on the wing also. Cameron is a true wing prospect that likes to create shots off the dribble from the perimeter, and also shoot the basketball from the wing. He has a good perimeter shooting stroke and also is a good ball handler that can create. As he continues to mature physically and get stronger, he will really see his game develop. He is an active rebounder and is a good passer that sees the floor, and enjoys getting the ball to the open teammate. He also runs the floor hard for scoring opportunities, and is a good athlete.

While we will now have to wait to see Holmes grace the high school hardwood for another year, the wait will be well worth it, as he should become one of the elite prospects in America nationally, and will have a very bright future ahead of him.