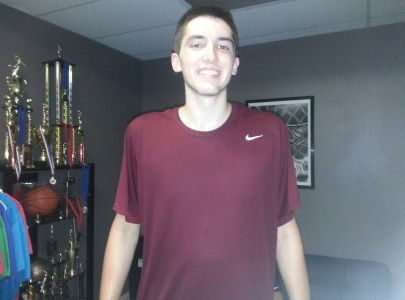 The 2012-2013 high school basketball season belonged to Corona Del Sol High School in the Division-I Class, but not without a strong fight from a talented Pinnacle HS team, whom would finish as the Division-I state champion runner-ups.

Pinnacle will look to compete hard, once again, with the Aztecs this up-and-coming high school basketball season, as they will return one of the state's most loaded ballclubs.  While Pinnacle already looked to be very good this season, the transfer of 6-foot-10, 245-pound senior post Cameron Gilbert could be the difference.

There are very few prospects around the West Coast with the physical size of Cameron Gilbert.  In fact, most of the prospects in the West that can match up with Gilbert currently reside in the state of Arizona, as the 2014 class is loaded with size and post players.  While the 2014 class in Arizona is absolutely filled with top-rated post prospects, Gilbert has flown well below the recruiting radar.  While Gilbert is being recruited, he does not possess a long list of scholarship offers.  In fact, he currently does not have any.

I caught up with Gilbert recently, and he advised me that he is currently receiving very good recruiting interest from such schools as UC-Santa Barbara, Idaho State, Bucknell, PENN, UC-Davis, UC-Riverside, Chaminade and Dixie State.

Gilbert also advised me that he is in no rush to make a college decision, but that he is hopeful that he will land some scholarship offers in the near future.

Gilbert should have no problems this season landing more recruiting interest, and, ultimately, landing scholarship offers.  After spending his final season with a loaded Pinnacle ballclub and competing for a D-I state title, Gilbert should receive his fair share of college coaching attention - especially during the spring signing period when Gilbert would be among the best post players still available late.  If he decides to wait until the spring, Gilbert could see much higher recruitment.

Gilbert transfers to Pinnacle after spending his first three high school seasons at Prescott HS, where Gilbert averaged 11.8 points, 8.4 rebounds and 4.1 blocks per/game - nice numbers for a developing post player.  If Gilbert can provide similar numbers this high school season for head coach Charlie Wilde, Pinnacle will be very tough to beat down the stretch.

Gilbert is still a project as a post player, but he has developed a great deal over the past year and is beginning to come into his own as a player.  Gilbert is a very big body that, once he plays his size consistently, could become a nice post prospect for many different college programs around the country.  Currently, Gilbert is a solid rebounder, but still needs to rebound outside of his area better, and is a solid low-post scorer, although he still needs to develop a go-to-move.  He is still raw offensively, but he is improving nicely.  As he adds a consistent mid-range shot to his repetoire, he will see his offensive game pick up substantially.

Gilbert is a good shotblocker now and will only get better over time as he gets physically stronger.  He runs the floor well for his size and is outlets the basketball to the guard.  He is a solid finisher now, but will improve here also as he matures physically.  He has grown a great deal over the past year, and I have been impressed with his improved natural size and strength.

Gilbert will definitely be one player to watch this high school season, as he looks to take Pinnacle over the top against two-time defending Division-I State Champion, Corona Del Sol.