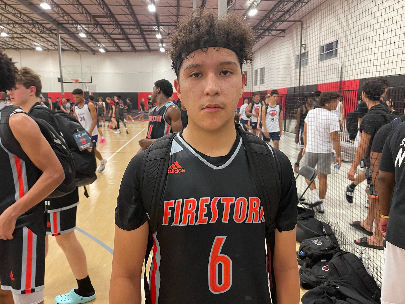 One of my favorite prospects to watch all spring and summer and one of my favorite overall prospects is Peoria High School's skilled and tough 6-foot-2 junior guard Andrew Camacho. While he may not be one of the hottest prospects with a ton of offers to his credit yet, he is well deserving of them. After a terrific club season where he torched his club competition consistently, Camacho now returns for his junior season, after two excellent previous high school seasons in his young high school career. Camacho is one of the state's elite scorers and performers, and he is set to have his biggest season to date this year.

All club season while observing Camacho while playing for a loaded Firestorm Gold 16-and-under team, I fell in love with his intensity, competitiveness, ability to score and shoot the basketball and finish over and around defenders. I will be honest, I have always loved Camacho's competitive spirit on the basketball court and was intrigued by his ability to score at a high rate among Arizona competition, but after observing and evaluating him consistently throughout the club season, I came away as a serious fan of this young man's ability and love for the game.

Camacho comes from a strong basketball family, led by his amazing father, Martin Camacho. Martin played at Peoria High School, and is among the top club coaches in the state - coaching his son to become the player he is today, and will ultimately become. Andrew Camacho has been taught extremely well by his father, who has created a monster in his son. An offensive killer that competes hard every night and with passion.

This season will be a big season for Camacho, after two terrific seasons as a freshman and sophomore. He is coming off a sophomore season where he put up impressive numbers - 18.4 points, 6.8 rebounds and 3.5 assists. He scored a career-high 40 points against Cactus High School, as he made eight of nine three-pointers in the win. Camacho averaged 14.7 points and 2.5 assists per game as a freshman, leading the Panthers to a 26-4 record and the 4A State Title game, where they fell to Salpointe Catholic, 54-48 in overtime. His junior season should be epic, as he posts much bigger numbers and could become the top overall scorer this season in AIA. I look forward to watching him.

Camacho is a combo-guard amidst Arizona competition, able to play either guard position and play at an elite level. In college, wherever he ultimately lands at, he will need and want to play the point guard position full-time, but is able to move into the scoring role quite well, as he is a pure shooter of the basketball with a quick release and unlimited range on his shot. Camacho is a sniper as a shooter, and is also able to place maximum pressure on opposing defenses due to his ability to drive and finish from mid-range or at the basket. He is a strong driver of the basketball that plays physical and gets to the free-throw line quite often as a result. He can also run a team quite well and get the basketball to the open man on the floor, while also being able to create scoring opportunities for his teammates as well. Camacho is a leader on and off the basketball court, which makes him valuable to any team that he plays for.

This will be a fun season to watch for Camacho who will lead a team at Peoria that will be deep but overall a little young. Camacho will lead this group and will put up terrific numbers in the process. Get your popcorn ready.