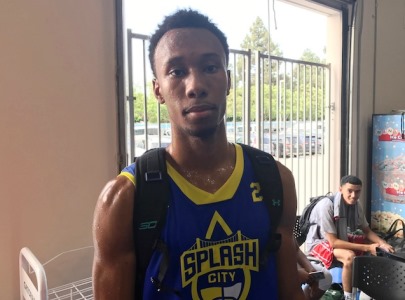 The wait is finally over for Desert Vista High School's 2017 graduate, 6-foot-6 wing prospect Caleb Simmons.  After playing through the spring and summer this club season, Simmons has landed a big Mountain West offer, and will now sign with San Jose State University, where he will play this fall.

San Jose State recently hired former University of Colorado assistant coach John Prileu as their new head coach, and Prileu immediately made it a priority for himself to fill out this season's rosters and land some top-rated talent still available.  Simmons opened a lot of eyes with his play this summer - playing very well on the club circuit and proving that he was very well under recruited.

Simmons leaves for school on Sunday, just before school starts, and will play this season (2017-2018) for Prileu and San Jose State.

Simmons had a good senior season (2016-2017) while leading his Desert Vista HS program to a 6A state final-four finish, before falling to eventual state champion Basha High School (43-38).  Simmons averaged 12.2 points and 5.2 rebounds per/game in his senior season, and helped lead Desert Vista to a 19-6 overall record this season.

This spring and summer, Simmons played for Splash City (CA) on the club circuit, and was impressive while playing for a very talented team of prospects, most of them from the 2018 and 2019 classes.  Simmons had his best performances in the Double Pump Summer Tip-Off and also the Fab 48 in Las Vegas.

Congratulations to Simmons and his terrific family on hanging in there, not getting discouraged, but rather trusting the process and working hard throughout.  He never once became irritable or looked to be upset over his situation, and, in the end, it all has worked out for him.

Arizona Hoop Review Scouting Report:  Simmons has an excellent body and size already for the collegiate level.  He is able to play several positions on the floor, showing excellent versatility as a player.  He is a good shooter with range on his shot, and is able to step outside past the 3-point line, where he is able to hit shots.  He also has a nice mid-range game, which allows him to make plays inside the three-point arc and at the basket.  He is also able to score off the dribble and finish plays inside the paint and around defenders.  A good ball handler with good versatility. A solid rebounder that needs to focus more in this area of his game. Good open court player and slasher. An active on-ball defender that plays passing lanes and gets deflections. Has good size. A solid looking prospect, and fundamentally sound.