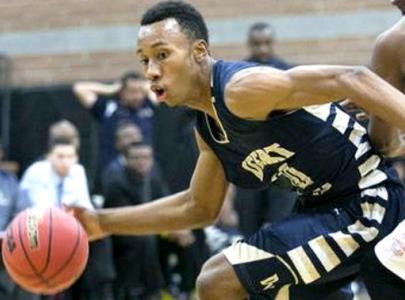 One of Arizona's top overall prospects in the 2017 class is Desert Vista High School's talented 6-foot-6, 190-pound junior wing Caleb Simmons.  While most prospects in the class are still in the process of defining themesleves as college prospects, Simmons emerged early in the class as a top-rated prospect.  As a result, Simmons has garnered much recruiting attention early from numerous college programs, and has five different scholarship offers on the table for himself.

I watched Simmons this week as his team defeated a visiting Hamilton High School team, 61-49, on Tuesday at Desert Vista HS.  In the aftermatch of a racial fiasco on the campus of Desert Vista over the last week, there was still some basketball left to be played.  Unfortunately for Desert Vista this season, they have struggled mightily for a team with so much athletic talent on their roster.  The Thunder are a mere 13-10 on the high school season, and it showed why on Tuesday evening, as a loaded team struggled to maintain their lead on Hamilton.

Simmons has been a bright spot for head coach Tony Darden this season, doing it all and with excellent versatility for a team that needs consistent top performers.  As his team sets their sights on a state title playoff run next month, Simmons will have to come up big for this team to have a chance to win it all.

Currently, Simmons does not have a leader in his college recruitment and he is wide open - looking to have a strong spring and summer for himself to improve his college recruitment and offers.  Simmons already has some very nice schools on his list of offers, so it will be very interesting to see where he lands when it is all said and done.  A very good performance on the spring and summer club circuit will benefit a long wing like Simmons nicely.

But first, Simmons will look to lead a very talented Desert Vista team as far as he can this high school season - looking to make a nice run when it counts in February.

Arizona Hoop Review Scouting Report:  Simmons is a gifted talent with excellent length and a nice overall skillset for the position.  Simmons has excellent basketball bloodlines - coming from a very successful basketball family.  Simmons has an excellent body already and uses his nice body to bully defenders on the low block, and is also able to step outside to the 3-point line, where he is able to hit shots.  He still needs to become more consistent in his shooting stroke from longer ranges, but he has a nice mid-range game that is attractive.  Simmons is able to score off the dribble and finish plays inside the paint and around defenders.  He is a versatile performer and is a good ball handler - capable of playing as a guard or from the wing position.  He is an active rebounder.  He is also a good open court player and slasher.  Simmons has very good size already and is still growing.  This is a very good looking prospect for the future, that is already beginning to garner serious recruiting interest.  To reach his full potential as a player, I would like to see Simmons begin to take games over on both ends of the floor.  It will be very interesting to see if he develops into that player over time.