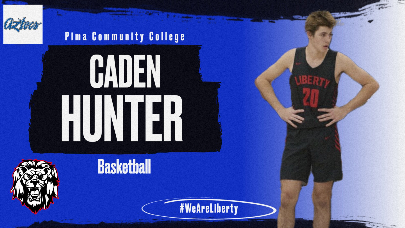 While numerous top-rated prospects have signed National Letters of Intent with their respective college programs during the NCAA Early Signing Period, one of my favorite prospects in Arizona's 2023 Class has found his fit for college as well, as Liberty High School's talented 6-foot-5 senior forward Caden Hunter decided to pull the trigger for himself - signing a national letter of intent with Pima Junior College and Head Coach Brian Peabody and his staff.

Hunter is one of my top sleeper prospects in Arizona's 2023 Class, so Peabody and his staff are getting a good one. Hunter made a very good decision for himself, as a nice stint at Pima JC, while playing for a well connected coach that will continue to help develop his talents, which will ultimately pay nice dividends for him and his future. Hunter and Pima JC will benefit nicely from this signing, as well as the ACCAC, as Hunter will become one of the better young prospects in the conference.

Liberty High School is one of my favorites to compete for a 6A State Championship this season, and will battle defending state champion Perry High School for the crown. Liberty Head Coach Mark Wood has one of his best teams ever this season. After finishing with a 19-8 overall record last season, Liberty returns many players from last year's team, and will be much stronger this season. Liberty returns many contributors from last year's group, but will be led by the play of 6-foot-6 senior wing Ky Green and Caden Hunter.

Last season, Hunter had one of the best seasons in the state among the Arizona Interscholastic Association (AIA) ranks, as he averaged very impressive numbers - 19.3 points, 10.1 rebounds and 2.6 steals per/contest, while shooting an impressive 52% from the field. These are tremendous numbers for a junior prospect, and Hunter will be back this high school season for more. For his efforts last season, Hunter was selected as the 6A Desert Valley Region Player of the Year, and also was a 2nd Team 6A All-Conference selection.

Arizona Hoop Review Scouting Report: This young man is an excellent sleeper prospect, as he fits the bill. Hunter has excellent toughness and plays with a chip on his shoulder. He is a true competitor and accepts challenges on the basketball court. He can score inside and out, which I like for him, as he has a high skill level that will only continue to develop over time with natural maturity. Hunter is a good shooter of the basketball with range on his shot, but likes to operate from mid-range or in the post, as needed. He likes to mix it up inside also and plays much bigger than his size suggests, as he rebounds very hard - a rare find among today's athletes. Hunter is a throw-back player of sorts as he is fundamentally sound and tough.