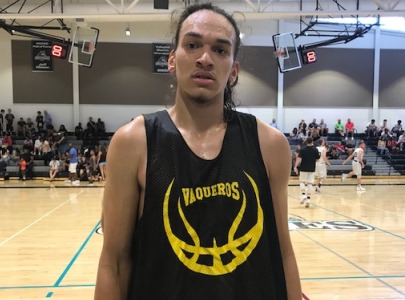 One of the elite returning prospects in the Arizona Community College Athletic Conference (ACCAC) this up-and-coming junior college season is Central Arizona Junior College's 7-foot, 220-pound sophomore post Trever Irish.  Irish is among the biggest post prospects in the junior college ranks nationally, but he is also a skilled performer that has generated a few scholarship offers for himself this summer.

Irish is among the top returning prospects in the conference this season, after having a strong freshman campaign for himself - averaging 14.3 points and 8.8 rebounds per/game, while shooting 62.6% from the field.  Irish was among the conference's top individual producers as a freshman, and I look for him to rank among the league leaders in numerous categories this junior college season.

Irish is a bigger low post prospect with good size, weighing 220 pounds and possessing good feet and hands for his size.  A native of Maine, Irish has a solid skill level, and an ability to run the floor and finish strong at the basket.  Irish has a lot of upside and is still growing  into his large frame, so his best years are definitely ahead of him.

Irish will be able to fill a big void for many division-I programs nationally that are in need of larger post prospects, and many college programs are looking for such prospects in the 2019 class, so Irish should become a hot recruiting target this junior college season, as he looks to lead a talented group at Central Arizona JC.

I will continue to follow the recruitment of Irish closely this junior college season, and bring you any recruiting updates regarding him as they develop.