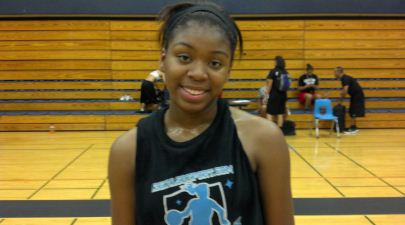 One of these prospects is Buena High School's 6-foot senior forward Nidja Thomas.  A very talented prospect that has flown well below the recruiting radar, Thomas is a superb talent that division-I college programs need to know about.

Buena HS is always known for producing top-rated basketball talent for high school boys and girls, and Thomas is next in line.

I caught my first glimpse of Thomas recently this fall at an event organized by Ron Coleman, and came away very impressed with this young lady's ability to play the game of basketball.  She has a nice frame and a very good overall skill level for the game, and was one of the most impressive prospects I saw perform at the fall event.  Thomas is a skilled stretch-4 prospect that is able to play inside or on the perimeter.  She has a good frame and is a very good rebounder on both ends of the floor.  She has very good toughness and does not mind physical contact.  A good finisher inside, she also has good footwork and solid low post moves.

What was most impressive about Thomas, was her ability to score away from the basket with a soft touch from the perimeter, which she shoots with good confidence.  Thomas also runs the floor very well and is a good finisher in transition.

Last season as a junior, Thomas averaged 7.8 points and 5.6 rebounds per/game on a team that finished 20-9 on the season.  Look for Thomas' averages to improve a great deal this season, as she will be expected to contribute much more - as the team's top returning senior.

Buena will be loaded this season, as Thomas teams up with a trio of top-notch junior prospects - 5-foot-7 junior Adrienna Anderson, 5-foot-9 junior Denesia Smith and 5-foot-11 junior Dominique Carpenter - providing the state with one of the best group of prospects on one team this high school season.

Look for Thomas to have a big senior season for herself and become one of the hotter unsigned senior prospects in the state this high school season.  I will continue to keep a close eye on her progress as a player and as a college prospect, and bring you recruiting updates as they develop.