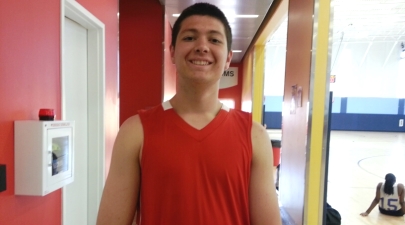 Arizona's 2015 class of prospects is still developing a great deal, but there are many prospects in the class that have already made a name for themselves and proven that they are serious college prospects.

One of these players is not a household name, as of yet, but he has developed into a prospect worthy of strong consideration among the better overall prospects in the class.  Buena High School's 6-foot-5, 210-pound junior forward Luke Reynolds is one prospect that is becoming one of the state's better junior prospects.  While he has not had a breakout season yet for himself, Reynolds is a well-coached and skilled forward prospect with very good size and a passion for the game of basketball.

Playing at Buena HS in Sierra Vista, AZ, Reynolds plays a long way from most basketball enthusiasts to watch him play enough to know much about him, but he has played considerable minutes and a key role in each of his two high school seasons for head coach Dave Glasgow.  As a result, Reynolds looks primed to have his best high school season to date this up and coming season - merely his junior year.  The next two high school seasons should be very strong for this skilled combo-forward.

Reynolds has very good size on his 6-5 frame and a strong, thick body which allows him to score inside and out.  He is at his best around the basket area where he is able to overpower most forwards, and has very good footwork, which allows him to score effectively around the paint with a variety of up-and-under moves and jump hooks.  He is also able to score from the perimeter and has a good jump shot with range, which will suit him nicely over time as he is able to make the transition to a small forward over time.  To do so, he will need to get quicker and more athletic but he could do so with natural maturity and physical training.

Reynolds is a fundamentally sound prospect now that has a good overall skill level and the body to develop into a serious college prospect.  What level over time will depend on his continued hard work and development as a player.  Reynolds grew very early in his development.  If Reynolds can grow another 1 to 2 inches, look out.

Currently, Reynolds is rated by our staff as one of the top overall prospects in Arizona's 2015 class - a class that still has time to develop, but looks to be another class of prospect filled with talent at the top of the class.  I will be watching this young man's development as a player closely over the next two years.