Bryce Meadows Making A Case In 2018 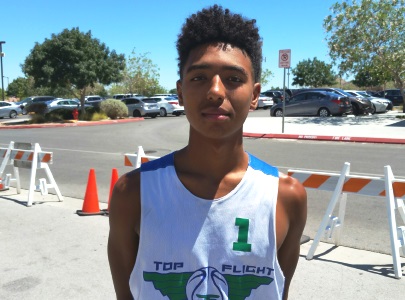 The 2018 class in the state of Arizona looks to be a very special class already, especially with super nationally acclaimed prospect Marvin Bagley in the group.  Another prospect that made a case for himself this summer among the top prospects in the class is Coronado High School's 6-foot-2 sophomore guard Bryce Meadows.

Meadows played his freshman season at Chandler High School, but will now pick up his sophomore season at Scottsdale's Coronado High School.  Meadows is primed to have a big sophomore season, after a summer where he picked up loads of attention with his play in exposure events in Los Angeles in July.  Meadows gained the attention of top-rated West Coast scout Frank Burlison this summer while participating in a Pangos event.

Meadows is the son of local basketball aficionado Jeff Meadows of The Hoops Report.  Jeff Meadows is known as the pioneer for exposure events in the state of Arizona, and has worked hard with his son to develop him as a player over the years.

Bryce Meadows is a nice looking guard prospect for the future, and has mid-major division-I potential currently.  He has the body and size at a young age that suggests that he could develop into a special guard prospect over time.

As we get set to release our new player rankings, look for Meadows to make a nice splash among the top prospects in the 2018 class.

Arizona Hoop Review Scouting Report:  Meadows has really developed over the years and I am impressed at how he has matured physically.  A nice combo-guard prospect with a good overall feel for the game and an ability to score the basketball.  He plays with superior confidence and has an excellent body already.  He has command-presence on the floor and likes to have the basketball in his hands, where he makes plays for himself and others.  One of the better combo-guards in the class that I have seen.  He has good size on his frame and good physical strength.  He should develop nicely over time.