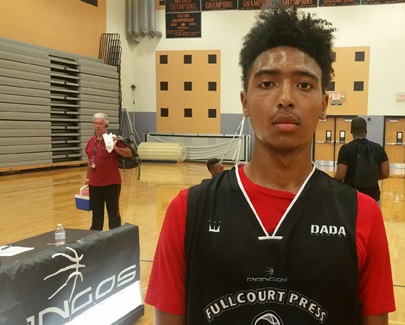 After beginning his high school career with Coronado High School in Scottsdale, Meadows spent his junior season at Aspire Prep Academy, one of the top prep programs in the West in their first season.  Meadows saw limited playing time as a junior, but gained valuable experience while playing against top-rated national competition.  As a result, Meadows is now among the top returning players at his position in the state's junior class.

Meadows has worked very hard on his game in the interim, and has worked diligently to develop into a pass-first point guard that has a nice overall repertoire of offensive skillsets, which allow him to score the basketball off the dribble, and also from the perimeter where he possesses a nice pure shooting stroke of the basketball.  He is a very good ball handler and passer that sees the floor, and is developing nicely in these two areas, which will benefit him a great deal over time.

Meadows has excellent work ethic and enjoys working on his craft.  Getting better daily is his goal, and he is a player on the rise as a result.

Meadows is very strong physically and will have no problem over time competing at the college level, since he already possesses a college-ready body.  He is a very good on-the-ball defender and plays passing lanes, with very good lateral quickness.  He is working on becoming quicker to defend elite guards with exceptional quickness.

In a 2018 class, where there are several guards such as Dominic Mooney (Buena HS), Jalen Fleming (Arcadia HS) and Mike Rogers (Cesar Chavez) that top the list of point guards in the class, Meadows is definitely putting himself in the conversation with hard work and a love for the game not often seen.

Meadows is the son of long-time Arizona basketball scout and tournament organizer Jeff Meadows, so he has excellent bloodlines.  The Meadows' family is also well known over the past 20 years for producing top-rated athletic talent, so this young man will be no different.  As a result, Bryce has been around the game of basketball since berth - creating a very high basketball IQ for himself.

I will keep a very close eye on the continued development of Bryce Meadows as a player over the next year, as he continues to blossom as a player and as a student-athlete.