Bryce Gosar soaring under the radar 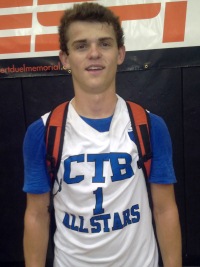 One of the top overall performers in the state of Arizona that many have either not seen or even not heard about is Sunnyslope High School's 6-foot-2, 165-pound senior combo-guard Bryce Gosar.

While not a household name like many other prospects, this young man is maong the state's best basketball talents.

Gosar has been absolutely on fire this high school season - leading his Sunnsylope HS team to a 13-3 record this season in the Division-II standings.

Gosar's numbers have been more than impressive, averaging 27.3 points, 2.4 assists, 4.5 rebounds and 2.7 steals per/game this season. The majority of the time, Gosar has been under serious defensive pressure as team's have attempted to slow him down.

With Sunnyslope averaging only 62 points per/game as a team, Gosar is averaging almost half of his team's points this season. Only one other player for the Vikings averages double-figures on the season - 5-foot-11 junior guard Isaiah Cota (14.3 ppg).

Gosar gained valuable playing experience this off-season, as he competed on the club circuit with his club program - CTB All-Stars. Gosar led his program in last summer's Desert Duel Memorial. While his team would struggle in the tournament, Gosar would turn in a strong individual performance.

Gosar is among the state's best pure basketball talents. While he is an unheralded prospect amongst college coaches still, this young man can flat out play the game. He is a very crafty offensive performer that is able to make shots and create shots for himself and others. He has an excellent shooting stroke with range and gets into shooting position quite easily off the dribble. He also uses a variety of jab steps and pivot moves to get his defenders off balance.

Gosar is also a very good ball handler and passer that sees the floor very well, although he is asked to score primarily for his team. He pushes the basketball up the floor and is willing to get the basketball to the open man.

Gosar is also a good defender with good lateral quickness and good anticipation on the floor. He does a good job of staying in front of his man and makes the ballhandler change directions. He has very good toughness as a player.

Gosar's weaknesses to his game won't be truely realized until he reaches the collegiatel level, where he will need to continue to develop in his ability to finish strong at the basket and over bigger defenders.

Despite two losses at the hands of Arcadia HS this season and a semi-final loss to Peoria HS in the pre-season, Arrowhead Desert Classic tournament, Sunnyslope has won their last 7 games in a row - including the tournament championship at this year's Northwest Holiday Tournament.

Gosar will continue to lead his Vikings' team this season and look forward to another match-up with Peoria HS in February (2/2).