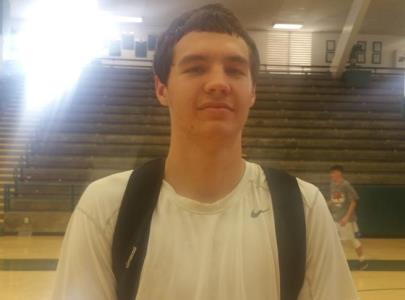 At the end of the period, 6-foot-3 senior guard Michael Kirkland would knock down a three-pointer at the buzzer to pull his team to within 4 points, 18-14.

In the second period, Cathedral would tie the game at 18 all, after a tap-in from Michael Kirkland in transition.  Kirkland would then score consecutive baskets to keep his team close, but Agua Fria's Daniel Foster would connect on a three-pointer in transition to push his team ahead 27-22, before another three-pointer from Foster would give Agua Fria an 8-point margin, 30-22.

After a three-pointer at the halftime buzzer by Cathedral, Agua Fria would go into the half with a 32-27 lead.

In the fourth period, it would quickly look like a different basketball game, as Cathedral Prep would put on their full-court press - creating numerous turnovers by Agua Fria.  Michael Kirkland would then move to the point guard position for his team, and begin creating scoring opportunities for himself and his teammmates.  With 5 minutes left to play in the contest, Cathedral Prep would get to within 4 points of Agua Fria, 51-47.

But Agua Fria would close it out, as 5-foot-11 junior guard Duron McNeal would score consecutive baskets late to finalize the victory for Agua Fria, 65-52.

Bryce Fowler would finish with a game-high 25 points and 6 rebounds in the win, while Daniel Foster would contribute 18 points and 3 steals for his team.

Michael Kirkland would finish with a team-high 24 points for Cathedral Prep.

Agua Fria will now advance to the tournament final on Friday evening @ 7PM against host Sunnyslope.

Recruiting Notes:  Agua Fria's Bryce Fowler is a big-time talent that has really grown on me over the last year.  Watching Fowler perform in this game, proved to me that this young man is a steal for Sacramento State, as he has excellent upside as a college prospect and is still growing a great deal physically.  This young man could grow to 6-8 in heigth over the next two years when he finally finishes growing.  He is an excellent shooter of the basketball with unlimited range on his shot, and has a very good feel for the game.  A nice pick-up for a Big Sky program.  Had Fowler waited until the spring signing period, and he would have seen much higher college recruitment.

Cathedral Prep (TX) senior guard Michael Kirkland is a nice sleeper prospect for a strong, smaller college program.  A gifted ball handler and passer that can create off the dribble, Kirkland has a very good feel for the game and is a very underrated prospect.  He is capable of playing both guard positions on the floor, and if he can shoot the basketball consistently from longer ranges, then he will really become a serious player over time.  A solid guard prospect fundamentally with an excellent body.

Kirkland advised me that currently he is not hearing from any college programs.  This young man is worthy of some serious college recruitment for himself.  He leaves everything on the floor and gives you everything he has.

Agua Fria's Daniel Foster is also a nice talent for Arizona's 2018 class.  A good-looking shooting guard prospect with a nice shooting stroke and a solid handle of the basketball.  He is also a very good defender that plays passing lanes.  If Foster can develop into a legitimate combo-guard over the next year, he could become a lower-level division-I prospect.  If not, then he is a very good prospect for a smaller college program.