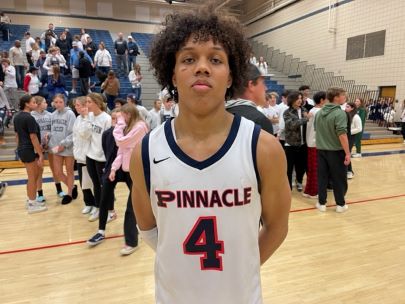 #1 ranked Perry High School (16-1) came into Tuesday's evening's matchup with unranked Pinnacle High School as the #12 ranked program in America. While Perry had a close affair with Ironwood High School recently in the Visit Mesa Basketball Challenge over the holidays, no one has really tested this Perry team. Led by two future McDonald's All-Americans in 6-foot-8 versatile senior guard Cody Williams and 6-foot-8 terrific sophomore forward Koa Peat, Perry has steamrolled through the high school season, thus far. That was until Tuesday evening when the Pumas would travel to Pinnacle on the road, and run into the heroics of 6-foot-2 senior guard Bryce Ford and his Pinnacle Pioneers.

Pinnacle High School (7-5) came into Tuesday evening's match-up with numerous injuries plaguing their team. Pinnacle 6-foot-7 senior post Duce Robinson would miss the game due to injury, and 6-foot-5 senior wing Ashton Reese (Trevecca Nazarene University signee) would be questionable for the game due to an ankle injury, but he would play, even though not at full strength. The addition of Reese would prove to be very valuable for Pinnacle Head Coach Charlie Wilde in the game.

The game's first half would belong entirely to Pinnacle's Bryce Ford, as he would score 21 points in the half to lead Pinnacle to a two-point halftime lead over Perry. Ford absolutely could not miss in the first half, and he seemed to connect on every shot that he took - many of them from deep with a contested hand in his face from a defender. Ford was poised and focused for a huge night, and he would get it done.

With Ford continuing his scoring explosion in the game's second half. he would foul out late in the contest with 1:53 left to play. With Ford on the bench, Ashton Reese would come up big, knocking down a big three-pointer with just over a minute left to play - pushing Pinnacle ahead 64-62. After Perry would tie the game, Reese would then miss a contested jumper for the lead.

Cody Williams would get fouled with just seconds on the clock and make 1 of 2 free-throws, and then Pinnacle's 6-foot-7 junior Braylon Johnson would make 1 of 2 free throws to give Pinnacle a 65-63 lead. Cody Williams would eventually travel the length of the floor for a final shot to tie the game at the buzzer, but his shot would hit the back rim - resulting in a huge 65-63 victory, behind an amazing game-high 38 points from Bryce Ford.