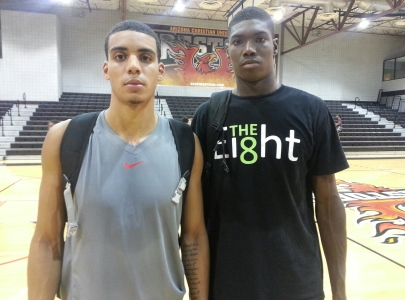 Two of the best prospects in the state of Arizona are in the prep school ranks, and both attend Planet Athlete Academy.

7-foot prep post Lamous Brown and also 6-foot-7 prep forward Kwintin Williams have both become very good friends this year, while living in the state of Arizona and competing together daily.  The two have worked against one another in practice, and also competed together while traveling around the country and playing against the nation's top prep programs.  Now they will continue that trend, as both prospects have decided to take their collegiate careers to the same college program as well.

According to Planet Athlete Academy head coach and founder Eric Bowman, the two prospects have decided to attend UTEP next fall - giving head coach Tim Floyd and his staff verbal commitments.  Neither prospect will be able to sign national letters of intent this spring, as both still have some work to do academically and will attend UTEP next fall as part of the NCAA's Prop 48 ruling.

Proposition 48 is an NCAA regulation that stipulates minimum high school grades and standardized test scores that student-athletes must meet in order to participate in college athletic competition.  The NCAA enacted Proposition 48 in 1986.

Under the ruling, a Division-I college-bound student-athlete can sit out their freshman year at the academic institutuion, unable to practice or play with the team for the season, while they attempt to meet the NCAA academic requirements, which includes meeting a 10-course requirement.

UTEP's current staff is widely known for recruiting top-rated talent to the program, and bringing in sleepers that have flown under the recruiting radar of larger college programs.  UTEP assistant coach Bob Cantu was responsible for the recruitment of Brown and Williams.  Cantu is among the elite basketball recruiters in the country.

Lamous Brown is a native of Chicago, Illinois, where he played for the famous Mac Irvin Fire AAU/club program.  Brown is a long and very athletic post talent with a high motor and raw offensive skills.  Brown is very exciting to watch as he tries to make every play and goes hard, trying to dunk anything inside the paint or even outside of it.  His shot selection is still very questionable at times, but he is capable of making shots and looks like he is right at home as the ball swishes through the net.  Brown's size and potential for the future are glaring attributes for him.

While Brown is still very raw overall as a college prospect, very few prospects in the West have Brown's combination of size, length and activity on the floor.  He has an excellent motor and competes hard.  Brown reminds me of former Mesa JC (AZ) standout and Miami Heat (NBA) draft pick Ernest Brown.

Kwintin Williams is a native of Alaska, and just as he is from a different culture, he also looks very different on the basketball court – showcasing some serious basketball talent.  Williams is a strong and athletic wing prospect with excellent overall size – possessing a college-ready body.  He has a variety of offensive skillsets with nice range on his jump shot and an ability to play well above the rim.  He has a good wingspan and is able to play inside and out.  He is a capable wing performer that may be at his best as a combo-forward (3/4).

Williams chose UTEP over offers from Manhattan and Delaware State.

Congratulations to both of these two student-athletes on this commitment, and also good luck to both of them on their college futures.