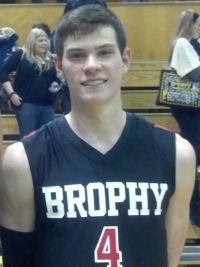 Brophy Prep 6-foot-4, 190-pound senior guard/forward James Harper had his best high school season of his career this year, and it has all paid off for the talented 2012 prospect.

While looking to continue playing through the spring and, possibly, the summer this off-season, Harper is now off the recruiting board and has signed with a division-I program - adding to the list of division-I signees from this year's 2012 class in the state of Arizona.

Harper had looked to attend a prep school next season and reclassify as a 2013 prospect, after already playing in two tournaments this spring with the Arizona Magic Pump N' Run-2013 squad, coached by new Westwind Prep Director of Basketball Operations Jeff De Laveaga.  With the Magic, Harper helped lead his team to an undefeated thus far this spring, and the championship of this year's Southwest Showcase Main Event.

While considering playing at a prep school next fall, Harper has decided to end his college recruitment and accept a scholarship offer from Houston Baptist University and head coach Ron Cottrell.

Harper helped lead his Brophy Broncos to a 23-8 overall record this season, and to the quarterfinals of the Division-I state playoffs this season, before losing to eventual state champion Corona Del Sol HS.  Harper was coached by Brophy Prep head coach and former Stanford University assistant coach Tony Fuller, and competed at the varsity level under Fuller for three seasons.

Arizona Hoop Review Scouting Report:  Harper is a 2/3 prospect that possesses very good toughness and is a nice slasher and open court player.  A very good athlete, Harper is a very good finisher and plays above the rim.  Harper is a solid shooter of the basketball with range, and has the ability to become a much better shooter over time with repetition.  He is a solid ball handler and passer, but needs to continue to work harder in these two areas of his game to maximize his potential as a player.  Harper's best asset is his ability to defend on the perimeter, as he has very good lateral quickness for his size and enjoys taking challenges on the defensive end of the floor.  Has the potential to become a lock-down defender.  A good rebounder and a capable shotblocker as a result of his bounce off the floor.  Has nice potential as a player and has an opportunity to become a nice looking college performer over time.  A good looking prospect that is a very underrated recruit.