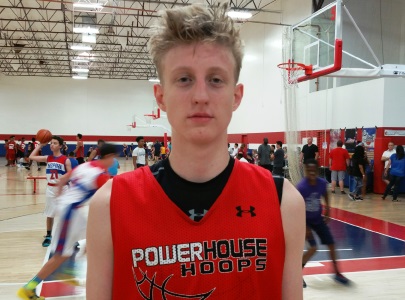 Brophy Prep (17-7) has recently been playing their best basketball of the season, finishing off several big wins over some very good competition.  A big reason for the strong play of Brophy Prep this high school season has been the leadership and strong play of 6-foot-4, 160-pound junior point guard Ian Burke.  Burke has excellent size for the point guard position, and has developed into one of the state's top overall prospects in Arizona's 2018 class.

As college coaches begin to turn their attention in April towards the state 2018 class across America, many college coaches will be taking a strong look at Ian Burke.  While possessing very good size and a heady approach to the game, Burke has become one prospect in the class that should garner a lot of recruiting attention from smaller division-I programs this spring and summer.

Very few guards Burke's size are true floor generals.  Instead, most are combo-guard prospects that lack the ability to make players around them better.  Instead they focus on scoring the basketball.  Not Burke.  This young man enjoys having the basketball in his hands and likes to make players around him better, through advancing the ball up the floor with the pass, and not over dribbling.  Instead, Burke makes his team go through consistent decision-making that leads to offensive production.  He is also a very good shooter with range on his shot - able to keep defenses on their toes with his ability to spread the floor.

Burke is a very good ball handler that does what it takes off the dribble to get by defenders and set up teammates.  He doesn't often play with the ball in his hands - allowing him to make passes to open cutters on the court.  He also is a good penetrator and finisher in the lane and in the open court.

Burke is also a good rebounder for the position and is able to post up smaller guards.  This is an area that I would like to see him begin to focuso n much more over time, as he matures physically.  His value in the post while posting up smaller opposition could become a nice asset to any team he plays for.  He is a very good team defender that understands positioning and floor balance on the court, and helps often from the weakside of the court - leading to steals for his team and scoring opportunities on the other end.

Currently, Brophy is playing their best basketball of the season, as of late, until a big loss on the road Friday evening, 75-55, at the hands of Pinnacle HS.  Brophy should bounce back through from the defeat, and be prepared to make a strong run in the 6A State playoffs.

The off-season though this year will be big for Burke, as he travels with the Powerhouse Hoops 17U Black team - a team that will be loaded with many of the state's top 2018 prospects.  Burke will be a major part of the team, as he will be a calming force for a group that should receive loads of college recruiting attention.

Look for Burke to continue to develop over the next year, and land a low to mid-major division-I scholarship offer over the club season.  He is definitely among the state prospects in the group.