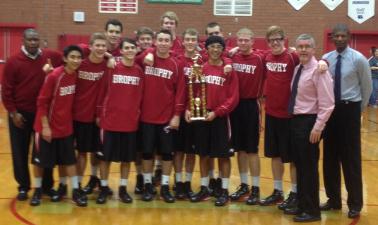 Brophy Prep continued their strong play for the 2012-2013 high school basketball season - improving their overall record on the early season to 4-0 Friday evening with a big double-overtime victory over a very talented Westview High School program, 76-73.  The big victory earned the Broncos this year's tournament championship of the pre-season Arrowhead Desert Classic.

Brophy Prep stellar head coach Tony Fuller, a former division-I head coach, managed his team perfectly in this game, as he has in each game previously this season.  Fuller put his team in a position to win throughout the game by managing his personnel efficiently.  While featuring a very inexperienced team this season for the Broncos, a team that returned only one starter this season from a year ago, Fuller has allowed his star 6-foot-9 senior post Tim Kempton (Lehigh University signee) to expand his game and his role on this year's team.  Rather than sit Kempton in the post and feed the basketball into him, Kempton has translated himself into a small forward at times, a power forward at others and a low block post player when it has been essential.  While facing many double-teams this season already, the ability for Kempton to move without the basketball in Fuller's offense has been a major ingredient to the Broncos' early success.  Kempton has made shots from everywhere on the floor, and has looked more like NBA legend Jack Sikma than his usual self on the basketball court.

Fuller's ability to raise the level of play of the remainder of his team around his start post has been another major factor of this year's success for Brophy.  For Brophy, no player has raised his performance more this season than 6-foot-2 junior guard Romano Bottini.  As a member of the junior varsity team last season as a sophomore, Bottini has continued his terrific play from the spring and summer this high school season.  Bottini has made shots at a high rate and taken a lot of pressure off of Kempton in the post.  Bottini connected on 5 of 7 three-pointers Friday evening, and earned himself a spot on the All-Tournament Team - a tremendous accomplishment for this young man.

Westview HS head coach Francisco Villa and his coaching staff, sporting a much more athletic and talented team of players in this game, chose to go to a zone defense against a sharp-shooting and efficient Brophy team.  Rather than speed up the game against Brophy, Villa and his staff chose to slow things down and take the air out of the basketball late - a move that may have cost them the game down the stretch.

Westview star 6-foot-8 junior post Andre Adams, who looked to be catching fire in the third period, would foul out of the game early in the fourth quarter.  Adams had also fouled out of the game in the 3rd period the night before.  It may have made better sense to sit Adams with 4 fouls and save him for later, but the Westview staff chose again to play the active Adams through foul trouble.

Westview took a narrow first quarter lead in the game, 20-19, after the first period on a buzzer beater from 6-foot senior guard Isaiah Scott.

Brophy Prep would storm back in the second period after Romano Bottini would connect on his third 3-pointer of the game in transition - making the score 27-22, Brophy.  Then with 1:25 left to play in the half, Bottini and 6-foot-4 junior forward Conor Triplett would connect on consecutive three-pointers for Brophy - keeping Brophy ahead 37-31.

Brophy would take a 38-35 halftime lead, after a nice floater in the lane by Westview's Andre Adams.

Adams would heat up in the third period - scoring 8 points in the quarter for Westview and keeping his team close.  After a three-pointer in motion from Kempton, and then another nice jumper from the wing for the skilled post player, Brophy would hold on to a narrow 51-49 lead after three quarters.

With 7:37 left to play in regulation, Andre Adams would get called on his fifth foul of the game - fouling out and having to sit on the bench for the remainder of the game.  Westview would then rely on the play of skilled 6-foot-4 junior guard Isaiah Bellamy and athletic 6-foot-6 senior forward Airen Randolph.

Bellamy would finish a three-point play, and then convert another driving layup with 3:12 left to play in regulation to give Westview the lead late in the game - 63-61.

After two free throws from Brophy's 5-foot-10 senior guard Austin Hammond, the score would be tied at 63 all.

Westview would run the clock down for one final shot, but after a missed shot attempt at the buzzer, the game would go to a first overtime.

In the first overtime, both teams would score, tieing the game at 65 all.  Westview would hold the basketball for more than 2 full minutes, while Brophy sat back in a zone defense.  Both teams would miss shots as the clock would run down - sending the game into a second overtime.

In the second overtime, the game would speed up a great deal.  Both teams would fire back at one another for a span of 3 minutes, until Tim Kempton would put Brophy ahead late, 73-71, after a spinning layup in the paint.

With the score 76-73 in Brophy's favor, Westview would rebound the basketball after a missed free-throw attempt from Brophy's Hammond and call a timeout with 13.9 seconds left in the game.  Westview's Randolph would walk the ball up the floor, losing valuable minutes off the clock and then call a timeout on the other end - setting up one final shot attempt.  As the final shot would misfire, Brophy would walk away with the narrow tournament championship.