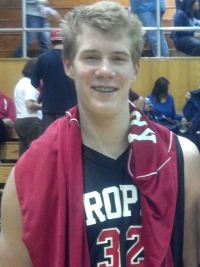 Brophy Prep (13-3) saw some difficulty early in the high school season after back-to-back losses, but since has been on a tear.

Brophy Prep would win their first three games of the high school season, before losing in the championship game of this year's Arrowhead Desert Classic to tournament champion Peoria HS (53-40).

The Broncos would then lose their next game on the road at Mountain Pointe HS, 58-54.

Since then, the Broncos, led by former division-I head coach Tony Fuller, have been playing very well. The Broncos would win this year's McClintock Holiday Shootout by default last week with a big win over Fairfax HS (14-3). The Broncos were permitted to play in the championship game of the tournament after losing to Alta HS (UT) in the tournament's semi-final game (66-54). Alta HS had to return to Utah after their semi-final win due to scheduling conflicts.

After winning this year's McClintock Holiday Shootout, the Broncos would win a rematch against Mountain Pointe HS last week.

The Broncos would defeat a talented Pride team 81-79 at home behind a strong effort from 6-foot-9 junior post Tim Kempton and 6-foot-4 senior guard/forward James Harper. Kempton would finish with his best game of his high school career, as he pumped in more than 30 points in the win, while Harper would go for 21 points himself.

As a result, the Broncos have won 10 of their last 11 games - 10 games in a row against in-state competition.

"Our team chemistry this year is stronger than ever and has set us above last year's team," said James Harper.

The Broncos are playing their best basketball of the season, like a number of other teams are in the Division-I Class, and while the competition will be fierce during the state playoffs, the Broncos looked to be well prepared this high school season.

Harper and Kempton are playing the best basketball of their high school careers, while 5-foot-11 senior guard Fred Gammage and 6-foot-4 senior Jordan Medl are both excellent contributors to the team's success.

The Broncos play a very disciplined brand of basketball that utilizes ball movement, good screens and unselfish play on the offensive end, and toughness and intensity on the defensive end of the floor. This style of play leads to lower scoring games but definitely wins.

If the Broncos can continue their strong play, they will match up very nicely this Friday when they host another well-coached team in Mesa Mountain View HS (8-6). Mountain View will be looking to get going for another state playoff run after dropping numerous games to out-of-state competition over the holidays.

Brophy Prep will face St. Mary's HS on the road this evening.

"We're playing confident and we are a team that will never give up," said Harper. "But we have a lot to improve on if we plan on making another run for the title. We just have to keep improving both physically and mentally."