Brophy Overcomes Slow Start Against Desert Vista in First Round 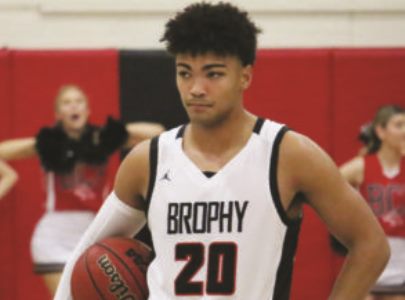 Brophy Prep (14-12) has had a very interesting season and has been hard to figure out for Head Coach Matt Hooten and his coaching staff.  After a very slow start to the high school season where they lost 5 of their first 6 games, Brophy would upset then #1 Mountain Pointe (63-61).  They would then win 7 of their next 8 contests on the season.  But then Brophy would struggle late in the season, as the team prepared for this year's 6A State Playoffs - losing (3) games in a row, before getting a big win over Hamilton and entering Thursday's night's first round match-up with Desert Vista.  Brophy had defeated Desert Vista (76-59) earlier in the season at home, and would again face the Thunder on their home court.

Desert Vista (17-10) came into Thursday's night's first-round match-up as the hotter team, as they had won their last (3) games entering the state playoffs.  Head Coach Gino Crump's team has also been up and down this high school season, as he and his staff have worked hard to gain consistency with a young team.

Desert Vista would come out early riding high on confidence and would surprise Brophy on their home floor, taking an early 12-2 lead in the contest, after a strong drive to the basket and finish from 6-foot-1 sophomore guard Malik Mack.  Desert Vista would take a 12-4 lead in to the game's second period.

Brophy Prep though is led by several football prospects that have excellent size and physical strength, which created serious problems on the glass for Desert Vista all night.  With their backs against the wall early, the Broncos would fight back in the second period to close the gap with the Thunder.

In the second period, Brophy would insert 6-foot-6 junior forward Basil Ribakare into their lineup and would get immediate production.  After an offensive rebound and put-back by Ribakare, Brophy would gain serious momentum - closing DV's lead to 5 points, 17-12.  Then a strong drive on the baseline from 6-foot-4 junior forward Joe Feeney, and then another strong drive by Freeney, and Brophy would quickly pull to within two points of Desert Vista by halftime, 18-16, in a low-scoring affair.

With Brophy taking serious momentum into the half, Desert Vista would not lay down and would look to regain their own momentum in the third period.  Crump and his staff would insert sharp-shooting 6-foot-1 junior guard Jackson Risi into their lineup in the third period, and it would pay dividends quickly for Desert Vista, as he would knock down consecutive three-pointers from the corners to give DV a 26-18 lead with 4:26 left to play.  Then, after a couple scores from Brophy, Risi would make a nice assist in transition to a streaking 6-foot-2 freshman guard Andrew King - giving the Thunder a 28-22 lead.

After a strong post-move inside which resulted in a three-point play from 6-foot-3 junior forward Arnold Dates, a late three-pointer from Andrew King would allow Desert Vista to hold on to a 31-25 lead after three quarters.

Brophy Prep would continue a full-court press in the game's fourth period, to give DV a different look and keep the pressure on the Thunder guards.  Brophy Prep's talented 6-foot-3 senior guard Marques White (Darmouth signee-pictured) was not counted on for scoring much on the evening, but his presence on the floor was felt late in the game, as he assisted his teammates for scoring opportunities.  A nice length of the court pass to an open teammate with 6:38 left to play would pull Brophy Prep to within one-point of DV, 31-30.

Brophy would storm back behind the strong inside play of Ribakare and Arnold Dates, who would be a lot for Desert Vista to keep off the glass.  The combination of those two and Freeney woud be a load down the stretch for Desert Vista to defend.  A strong driving basket from Freeney in the half-court set with 6:02 left to play would give Brophy their first lead of the contest, 32-31.  Then an offensive rebound and put-back from Arnold, and a strong jump-hook from Ribakare, and Brophy would take a 36-33 lead with 3:36 left to play.

Desert Vista's Jackson Risi would knock down another three-pointer late to keep his team in the hunt, 38-36, but Brophy would then convert numerous free-throws down the stretch to pull out a 46-36 first round playoff victory over Desert Vista.

Brophy will now face #1 seed Pinnacle HS on Tuesday (2/19) in the second round of the 6A State Playoffs, and will look to avenge an earlier season loss to the Pioneers on the road.  While Pinnacle is the class of the state's 6A Division, and also are the returning state champs, this Brophy group should definitely present a serious challenge for Pinnacle, as they are very physical and athletic and difficult to keep off the glass.  It will make for a very interesting second-round match-up, as the state's top prospect, Nico Mannion, will look to lead Pinnacle to their second-consecutive state championship.

Scouting Notes:  Brophy Prep's 6-foot-4 junior wing Joe Feeney is a skilled and strong, physical prospect with a college-ready body and a nice shooting stroke with range.  He has a nice jump shot that keeps defenses honest, and also sets up his strong drives to the basket - a very good balance for his perimeter skillset.  Feeney is one of the best I have seen in the 2020 class at setting up the defense with his ability to score inside and out.  He is a good driver of the basketball and finisher at the basket.  A strong rebounder and finisher.  More focus on the glass will really raise and maximize his potential as a prospect.  A good ball handler and passer that pushes the ball up the floor with an excellent zip on his passes.  Sees the floor well.  Competes hard and has very good work ethic.  A very good sleeper prospect in the class that could see a good rise in our next player rankings (Arizona Hoop Review Scouting Report), with a strong finish to the season and a good spring showing.

Brophy Prep 6-foot-6 junior forward Basil Ribakare is a nice talent that has excellent potential for the future.  He is a very long and rangy forward prospect with excellent length of body, which suggests that he will develop nicely over time.  As he fills into his thin frame, he will really develop as a player and prospect.  This young man has excellent potential and upside for the future.  He keeps the basketball up high on rebounds and is a good finisher around the basket.  He is a good low post scorer with good footwork.  He runs the floor hard and is a good finisher in transition.  has a bright future and loads of upside.