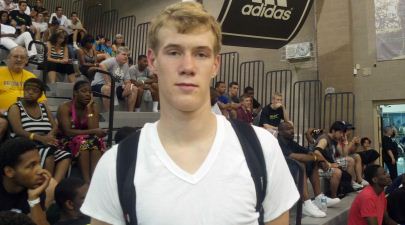 The 2012-2013 high school basketball season is officially underway this week with many high school basketball games taking place around the state this week in numerous Thanksgiving week tournaments.  Arizona Preps was on hand Tuesday evening to watch Brophy Prep (3-0) take on a pesky host program, Liberty High School (1-2), in the second round of this year's Arrowhead Desert Classic.

Tuesday evening, Brophy would face a game group from Liberty HS, led by the strong leadership of committed head coach Mark Wood.  Liberty would struggle offensively for much of the game, as Brophy would take a comfortable 33-23 lead into the game's fourth period, after a transition basket by 6-foot-2 junior guard Romano Bottini.

But Liberty would make a strong final run in the fourth.  6-foot-4 senior wing Brandon Beenau would catch fire - converting consecutive three-point attempts from deep with 5:45 left to play in the game and making the score 37-34.  Then a basket inside by 6-foot-7 senior post Michael Imholz would cut the margin to one-point, 37-36 with 5:20 left to play.

Brophy would come right back behind a three-point play in transition by 6-foot-3 junior forward Conor Triplett, then an offensive put-back from Bottini - pushing Brophy back ahead 42-36.

After a timeout by Wood and Liberty, two more consecutive three-pointers in transition by team captain, 5-foot-8 senior guard Josh Clay, would close the gap to 44-42.

Kempton would continue his terrific play, as he would convert two free throws and then an inside basket after being fouled.  Another free throw by Kempton would complete the three-point play, and put Brophy ahead 49-44 with 2-minutes left to play.  Romano Bottini would then seal the win with two free-throws with :18 seconds left in the game.

Brophy would win the game 53-49 and advance to the tournament's semi-final round on Wednesday, where they would handle a talented Sierra Linda HS team by a 19-point margin.  Kempton would finish the game again with a game-high 28-points in the win.  Brophy has also received strong play from Romano Bottini, who is averaging 10 points for the Broncos off the team's bench this season - excellent production for Brophy head coach Tony Fuller.

Brophy will now advance to the tournament's championship game on Friday evening, where they will face an absolutely loaded Westview High School team.  Westview (3-0), riding the play of top-rated 6-foot-9 junior forward Andre Adams, defeated Prescott HS 67-56 on Monday, and then squeaked past a tough Greenway HS team on Wednesday evening, 58-54.