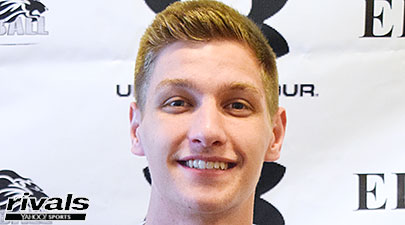 One of the top overall prospects in Arizona's 2016 class is now off the recruiting board, as 6-foot-6 senior wing Brock Gardner of Tri-City Christian Academy gave a verbal commitment this weekend to Liberty University.

Gardner's pledge to Liberty came after a very good in-home visit last weekend at his home in Chandler, then an official recruiting visit to Liberty this weekend.

While Gardner has numerous scholarship offers, Liberty  got in on Gardner very early in the recruiting process and seemed to recruit him the hardest.  Gardner chose Liberty University over other offers from LeHigh, Dartmouth, UC Davis, Columbia, Air Force and Central Arkansas.

Last season as a junior, Gardner's best season to date, he poured in 25.8 points, 9.2 rebounds, 4.3 assists, 2.5 steals and 2.1 blocks per/contest.  What has been most impressive about Gardner is that he also averaged 24 points and 10 rebounds as a sophomore, and 19 points and 8 rebounds as a freshman.  Gardner has had an amazing career already for himself, and should have another huge senior season.

Congratulations to Gardner and his family on this amazing accomplishment for himself.

Arizona Hoop Review Scouting Report:  Gardner has many skills to like. He can handle the ball well, pass to his teammates, drive the lane, defend fairly well and shoot the deep ball.  He can put points up in a hurry as a result of his tremendous versatility. Has very good size and is able to make plays for himself or others.  He has really developed a solid all-around game.  Gardner has a solid shooting stroke that can extend out to 23 feet comfortably, and he can also put the ball of the floor and get to the basket, due to his long strides and quick first step.  He excels in transition and uses his athleticism to either finish plays or draw the foul and get to the line.  An active rebounder with good length of body.  He has put up huge overall numbers throughout his high school career.  A very good athlete.  Solid ball handler and passer.  A very good sleeper prospect.  A tremendous student-athlete.