Brock Brunkhorst On The Rise 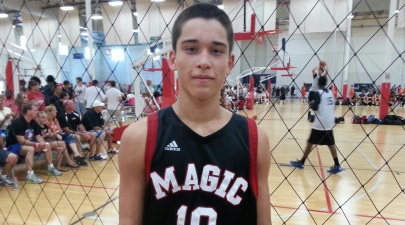 Arizona's 2016 class looks to be another very talented class of prospects for the state of Arizona. While it is still very early in the process, there are many prospects that have already risen to the top of the class. One of the top overall prospects in the class has quickly become Brophy Prep's 6-foot-3 sophomore combo-guard prospect Brock Brunkhorst. Among the elite scorers in the class already, Brunkhorst is coming off a strong spring and summer performance where he made his move up the 2016 class rankings.

The first thing that comes to mind with Brunkhorst is his recognizable name. The son of former University of Arizona legendary player and also former division-I assistant coach Brock Brunkhorst, this young man is quickly following in his father's footsteps and has shown a lot of potential for the future as a college prospect.

During his first season of high school varsity basketball and also his freshman season, Brunkhorst showed glimpses of future greatness, as he received important minutes from Brophy Prep head coach Tony Fuller throughout the season and came up big for the Broncos on numerous occasions. While the young Brunkhorst is still a developing young prospect, he proved that he can play with the state's best players and has no fear.

This spring and summer while playing at the 16U level for much of the club season, Brunkhorst teamed up with some of the state's top 2016 prospects and a member of the 2017 class on the Arizona Magic Pump N Run-2016's. The team was coached by former Arizona high school basketball star post player Justice Sueing, a graduate of Alhambra High School in 1991. Sueing went on to play collegiately at the University of Hawaii, and a then played many years professionally overseas.

Brunkhorst, while he still has a lot of hard work ahead of him and a natural maturation process to go through, has shown the early ability to become a serious division-I prospect in the future. Just how high Brunkhorst gets recruited in the future will depend on his continued development as a player.

"He still needs to be more aggressive as a player," said his father Brock Brunkhorst. "He has a long way to go."

While it may seem that this young man has big shoes to fill, he is making a name for himself as a player.

Brunkhorst is a very skilled combo-guard prospect that is able to score in a variety of ways. He can score off the dribble behind a nice mid-range game which allows him to get shots for himself, or from the perimeter where he is a deadly three-point shooter with nice range on his shot. He is also a good finisher in the lane - an area of his game which should continue to get better over time with added physical strength in the future.

Brunkhorst is a good ball handler, which makes him capable of playing both guard positions on the floor. He also has very good court vision and a nice overall feel for the game. He still takes chances with his passing at times, so he will need to continue to get stronger with the basketball when playing the point position. He should cut down on his turnovers, as he develops a better understanding of how to take over a game offensively.

He is a good defender with good lateral quickness and good court anticipation, which allows him to play passing lanes and create turnovers for his team. Ultimately, this young man is a competitor and enjoys playing the game of basketball - a nice asset.

I look for Brunkhorst to develop into one of the elite prospects in Arizona's 2016 class over time. It will take a lot of hard work, but, based on what I have seen so far, it should be right in line with his development as a player.

Arizona Hoop Review Scouting Report: Bo, as they call him, has a good all-around game. He has a high basketball IQ and he helps his teammates on the sidelines. His game is so balanced that on every possession you really don’t know what to expect from him. He starts in the triple-threat position to survey the court and then goes to work. He could hit you from deep 3-point range with his beautiful stroke, and then blow by you and finish with the left or right hand. He is also a strong passer, capable of hitting teammates in stride to the basket, and also able to throw full-court passes perfectly. He also is deceptively long, as he is a good rebounder and has real solid defense due to his length. He is a very productive prospect that has very good versatility for his size. A budding young prospect with excellent potential for the future.