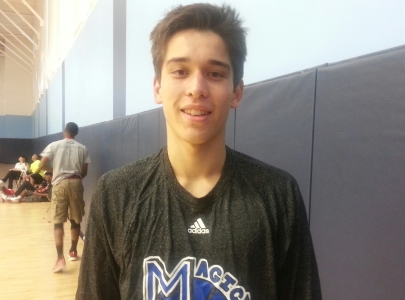 The 2014 club basketball season is officially underway for the state of Arizona, and some players are already making strong cases early on in the club season for themselves.  One of these prospects that has already taken his game to another level this club season is Brophy Prep's 6-foot-3 sophomore combo-guard prospect Brock Brunkhorst.  While Brunkhorst has been well regarded by our staff as one of the elite prospects in Arizona's loaded 2016 class for some time, this young man proved convincingly in this year's recent Southwest Showcase Main Event that he has the goods to become a serious college prospect.

Brunkhorst led his Arizona Magic Pump N Run 16U squad to the championship of this year's SWS Main Event 16U title, amidst some very strong competition in the tournament.  In route to an impressive championship performance, Brunkhorst raised his game to another level and came up big in each game of the event.

Arizona’s 2016 class looks to be another extremely loaded class of prospects for the state of Arizona - the next best class of prospects in the state.  While the class has developed a great deal over the past year, Brunkhorst's ability to play the game has developed right along with it.  After coming off a strong spring and summer performance in 2013 where he made his move up the 2016 class rankings, Brunkhorst looks now prepared to have a much bigger splash during the 2014 club season.

Brunkhorst is the son of former University of Arizona legendary player and also former division-I assistant coach Brock Brunkhorst.  He is also the cousin of top-rated college guard Matt Carlino, so the strong basketball bloodlines are definitely glaring.

Brunkhorst is already hearing from numerous high-major division-I college programs, as such college programs as Stanford, Gonzaga and Washington State are already expressing strong interest in Brunkhorst as a college prospect.  Look for many college programs to begin turning their interest to him as they begin focusing on the 2016 class of prospects around the country.

Brunkhorst is a very skilled combo-guard prospect that is able to score in a variety of ways. He can score off the dribble behind a nice mid-range game which allows him to get shots for himself, or from the perimeter where he is a deadly three-point shooter with nice range on his shot. He is also a good finisher in the lane – an area of his game which should continue to get better over time with added physical strength in the future.

Beau is an excellent competitor and hates to lose, which allows him to raise his game at crunch time during basketball contests.  He is a good defender with good lateral quickness and good court anticipation, which allows him to play passing lanes and create turnovers for his team.

While the 2016 class in the state of Arizona is absolutely loaded with college prospects, Brunkhorst has already made a strong case early this club season as one of the elite prospects at his position and among the class overall.

Arizona Hoop Review Scouting Report: Brunkhorst has a high basketball IQ and is able to play both guard positions on the floor, although he is at his best as a point guard, or simply with the basketball in his hands.  He is a strong ball handler and passer that has an excellent overall feel for the game - making players around him better.  He is a big-time shooter of the basketball with unlimited rang on his shot and an ability to make plays off the dribble - making him very difficult to defend.  He also has a strong mid-range game, and is able to get into the lane and finish plays against bigger defenders.  Brunkhorst is able to finish plays in traffic with either hand efficiently.  He is also a strong passer of the ball - capable of hitting teammates in stride to the basket, and also able to throw full-court passes on a dime.  He also is deceptively long, as he is a good rebounder and has real solid defense due to his length. He is a very productive prospect that has very good versatility for his size. A budding young prospect with excellent potential for the future.