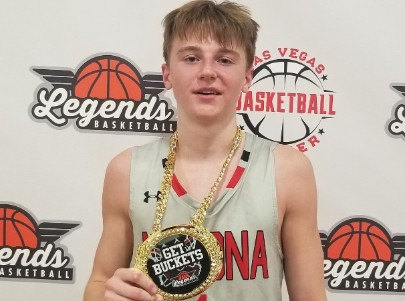 While Arizona's 2022 Class is loaded with gifted prospects, Arizona's 2021 Class is also very talented. PHHoenix Prep 6-foot-4 rising senior guard prospect Brett Hardt is one of the elite shooters of the basketball in the class, and has seen his share of college recruitment as a result. On Thursday afternoon, in very surprising fashion, Hardt decided to end his college recruitment and give a verbal commitment to DePaul University, a member of one of the nation's top college basketball conferences, The Big East.

Hardt received an offer from DePaul University last weekend, in what also was a nice surprise for the Arizona basketball community. While Hardt had previously received offers from UC Santa Barbara, Idaho State and Appalachian State, his recent offer from Dave Leitao and his basketball staff was a very nice one, one that he could not pass up, especially since he and his family are originally from the Illinois area.

Strong shooters of the basketball often fill a nice void for college programs, and Hardt is a specialist in this area, as he may be the best pure shooter of the basketball in his class of prospects. Hardt has a pure shooting stroke with excellent range on his shot and a very quick release. He can get his shot off effectively and stretch the defense quite well, while also being able to put the ball on the floor and make plays for himself off the dribble, where he is able to finish in the lane with floaters and strong drives to the basket. As a result, he is also a very good play maker and facilitator for his teammates and can create. He is not just a shooter, which makes him an attractive prospect for college programs.

Hardt also competes hard and plays with a chip on his shoulder. He has some toughness to him and plays with grit, while being very crafty in his overall approach to the game. While Hardt was a bit of a sleeper prospect before, DePaul found a nice fit for him in their program, as the Blue Demons look to build on last year's early season success. DePaul had looked to make a nice run in the Big East Tournament, after winning in the first round, before the tournament would be cancelled due to the COVID-19 pandemic.

Hardt is also an absolutely gifted student and was selected as the Grind Session's Academic Player of the Year last season.

Congratulations to Hardt and his family on this amazing accomplishment, as well as to the PHHoenix Prep program from our Arizona Preps' staff.