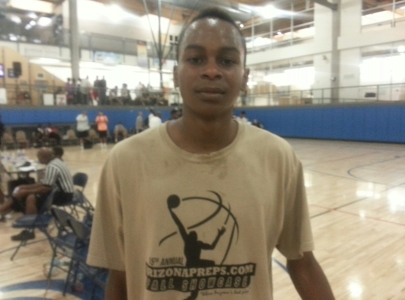 With the start to this year's exciting 2013-2014 high school basketball season upon us, let's take a hard look at some of the players to watch this season.  These are players that I expect to have breakout seasons this year and develop into breakout performers among the state's top overall prospects.

One rising senior top performer is Deer Valley High School's talented 6-foot, 160-pound senior combo-guard prospect Deron Kyle.  This young man proved recently that he is among the top guard prospects in the state.  Even though he has flown well below the recruiting radar for some time now, Kyle is now prepared to have a big breakout season for himself and Deer Valley HS hard-working head coach Jed Dunn.

Recently, Kyle emerged big in several pre-season showcase events, including this year's Arizona Preps Fall Showcase.  Kyle also had a strong performance on the spring and summer club circuit.  Based on what I have seen from this young man, as of late, I feel that he is worthy of the attention and will take his game to the next level this high school season.

The reason for Kyle being considered as a breakout performer, is that his output this season (2013-2014) will be much higher than his output last season.  Kyle averaged a mere 5.6 points, 1.3 rebounds and 1.2 assists per/game last season.

Kyle is as athletic a guard as there is in the state of Arizona this year, and I feel that his ability to make shots and his pure athleticism as a player make him a candidate for a prospect that will raise eyebrows this season with his play.

While Kyle is not a division-I college prospect, he is a very good prospect for a smaller college program looking for an ultra-athletic guard that can make plays.  Keep an eye out for this one this season as he teams up with a talented and experienced group that finished with an impressive 20-8 overall record last season in the Division-I Class.

Arizona Hoop Review Scouting Report:  Kyle has developed nicely over the past two years and now has become one of the state’s top scoring guards, while also possessing superior athleticism and a nice motor.  Kyle is a left hander making him difficult to defend, once he gets going.  A very good shooter with nice range on his shot.  A good penetrator and finisher at the basket.  A good ball handler and passer.  Needs to continue to progress as a point guard to become a true combo-guard at the next level.  Has good potential for the future.