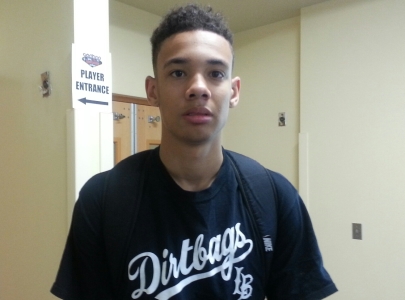 Campo Verde High School is a relatively new high school, located in Gilbert, Arizona.  While being new, the basketball program at the school is not known for producing much basketball talent for the collegiate level.  6-foot-7, 190-pound rising senior wing Brandon Whitaker is developing nicely and now looks to be the best basketball prospect the school has seen.

Whitaker is definitely still a work in progress, but this talented wing prospect is coming on quickly and has the potential to become a very nice college performer over time.  After a junior season where Whitaker had his best season of his high school career, he looks now headed to have a big senior year and become one of the state's best talents.

The spring looks to be a good indication for Whitaker, as he played very strong on the club circuit.  Whitaker played with much more of a purpose on the basketball court, and also competed at a higher level for himself - proving that he is more than just potential for the future.  Whitaker shot the basketball very well from three-point distance and also showed an improved mid-range game.  He also now makes better decisions with the basketball, and looks to get his teammates involved.  He has the length, athleticism, sheer potential and upside to become a serious prospect over time.

While Whitaker has yet to receive his first scholarship offer, he raised his recruiting stock as much as any player in the 2016 class this spring.  Whitaker will now look to gain much more recruiting attention this summer, and is definitely a nice sleeper prospect in the class - someone that with physical maturity will become a serious player.  Whitaker is very young for his class, and is still 16 years of age.  He should be a member of the 2017 class, so a year of post-grad in prep school would make a huge difference for him as a player.  It will be very interesting to see how his recruitment unfolds, and whether he will land in a college in the fall of 2016 or in a prep school.

Whitaker will travel with his club program, the Arizona Magic Elite, next month to California for the Pangos Summer Sweet 16 (July 10-12), to Texas for the Great American Shootout (July 16-19) and then to Las Vegas for the Fab 48 (Juy 23-26).

I will continue to follow the recruitment and progress as a player of Brandon Whitaker, and bring you any updates as they continue to develop.