Brandon Hoffer A Special Prospect For 2015 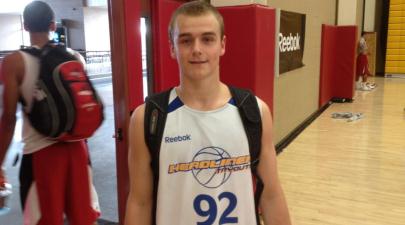 Arizona's 2015 class is beginning to take shape, as several prospects in the class have risen to the top of the class early on in their high school careers.  One of these elite prospects in the class is Chaparral High School's 5-foot-11 steady floor general Brandon Hoffer.  After a strong freshman season for Hoffer where he saw immediate success at the varsity level, Hoffer has continued to build on his success and now looks ready for a much bigger sophomore season.

As a mere freshman last season, Hoffer was immediately inserted into the Firebird's varsity lineup.  While the school went through several coaching changes during the 2011-2012 season, the play of Hoffer was consistent - very impressive for a freshman prospect.

What was most impressive about Hoffer's performance was the fact that Hoffer plays the point guard position.  While it is very difficult to make an impact as a freshman at the varsity level, it is even much more difficult to do so from the point guard position.  A young PG must learn the plays, be able to implement the plays, make sure teammates are in their spots on the floor, manage the game clock and, after all that, show leadership as a youngster to much older teammates.  Hoffer did all of this as a freshman and with a good level of proficiency.

Look for Hoffer to raise his numbers a great deal as a sophomore, as he will be counted on much more to lead this year's group.  Teaming up with 6-foot-8 senior post Joe Boyd (Drake University commit) and 6-foot-6 senior post Eric Conklin, Hoffer will give the Firebirds an excellent chance at a Division-I state championship this season.

Hoffer is coming off a good summer performance, leading his club program, the Arizona Aces, in numerous club events.  Hoffer competed at the 17U level this summer, and recently led the Aces to a local tournament championship at the Southwest Showcase Labor Day Classic.

Hoffer is a special prospect for the 2015 class.  He possesses an excellent basketball IQ - much higher than his age suggests.  He is a born leader with excellent toughness and grit as a player.  He also has excellent work ethic and loves to work on his game and develop as a player.  All rare qualities found in a top-rated prospect so young.

Hoffer is currently rated among our top three prospects in Arizona's 2015 class, so his recruitment should begin to soar as a player in the very near future.  It is still too early to tell which schools are serious at this point, so his sophomore season will play a major role in developing his college recruitment.

I will be keeping a close eye on Hoffer this season, and will look to bring you more from this young man as we will look to conduct an interview with him before this year's Arizona Preps Fall Showcase event.