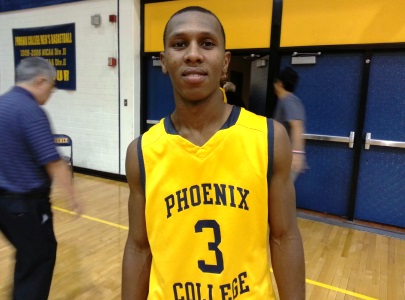 Last season as a mere freshman for head coach Matt Gordon, Brown led his Bears to the Division-II National Championship in fine fashion.  Brown's season could not have been any better for a young man that had overcome some serious off the court problems before his career at Phoenix College.  Brown emerged as the top freshman prospect in the conference last season, and also proved the be the top overall point guard in the conference as well.  Brown would earn Freshman of the Year honors in the ACCAC as a result of a terrific freshman campaign.

This season, Brown returns as a heralded sophomore prospect in the country - ranking among the top prospects nationally in the junior college ranks.  As a result, Brown is currently being recruited by many division-I programs in the country, and currently has offers from such schools as Virginia Tech, Utah State, UC-Riverside, Montana, Portland State and Loyola-Chicago, with many more schools looking to get involved.

According to terrific head coach Matt Gordon, Brown will look to make his college decision in the spring and is focusing on his team and winning ball games.

Brown is a very skilled and jet-like quick point man with a variety of offensive moves and an ability to make plays for himself and others at any time in the Bears' offense.  Brown is the most difficult player to defend with the basketball in his hands in the conference - possibly in the West.  He has an exceptional handle of the basketball and can get anywhere he wants to on the floor.  He can finish with either hand in traffic and also over bigger defenders.  He also is a very good shooter of the basketball that has developed his shot into becoming a dead-eye shooter with range, especially off the dribble while trying to create for himself against defenders - a nice attribute.

What makes Brown so valuable is that he is also a floor general and makes his team go.  He plays with superior confidence, and puts his teammates in excellent offensive position to score the basketball.  When Brown has the basketball in his hands, simply get open and he will find you.  He makes it even more difficult to defend him, since defenders have to try to defend him first, but then also worry about his teammates moving without the basketball, as a result of the pressure Brown places on the defense when he penetrates.  He pushes the basketball up the floor every chance he gets, and forces teams to transition defensively each time the ball goes up.

On the defensive end of the floor, Brown is just as valuable to his team.  He has excellent lateral quickness and quick hands and feet.  Very strong physically, Brown is a lock-down defender that makes it diffuclt for opposing guards to get in to their offense.  His ability to defend is almost as valuable as his ability to run his team.

Brown will be the conference's top performer this season, and he should have absolutely no problems leading another talented group from Phoenix College to a consecutive Division-II conference title in the ACCAC this season.  The only question is just how deep can he take this year's group in the Division-II national tournament.