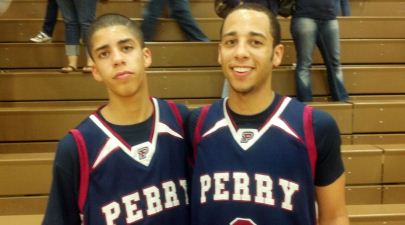 Saturday evening led to some exciting action around the state in the Division-I state playoffs.

Led by another big upset playoff victory by Perry, and a surprising blowout win by Desert Vista, it was a very interesting evening.

First, while it seemed as a major surprise to basketball fans, it was not a surprise as #23 seed Perry HS (21-8) overcame a 14-point deficit Saturday night in the fourth period to defeat #7 seed Basha HS (22-7). What was a surprise was that Perry was able to overcome such a deficit in one quarter - especially against a team that includes three proposed high major division-I prospects in 6-foot-4 junior guard Jaron Hopkins, 6-foot-8 junior Torren Jones and 6-foot-9 junior Maurice Kirby.

Basha has been on a losing streak as of late this high school season, losing 4 of their last 5 games to end of the season. Unreal for a team with such talent and size. This team, as of late, has been plagued by poor decision making from the guard positions, and an inability to work the basketball inside to the post.

Perry senior point guard Desmond Howard scored seven points in the final 45 seconds of the game to help lead Perry to an impressive 68-67 playoff win - advancing to the state quarterfinals for the first time in the school's history.

The Thunder jumped out to a 25-5 lead after the first quarter and never looked back as Desert Vista played together - routing the Toros 69-37 and advancing to the state quarterfinals.

Desert Vista will now face a tough Gilbert HS team in the state quarterfinals on Tuesday at Wells Fargo Arena ...

In other playoff games on the evening, #1 seed Corona Del Sol held on to knock off #16 seed Desert Mountain 55-43, and will advance to take on Brophy Prep in the quarter finals on Tuesday. #9 seed Brophy Prep came up with a big road win over #8 seed Westview HS, 73-64.

#3 seed Red Mountain HS (23-9) held on to win a narrow playoff win over Mountain Pointe HS, 48-47, behind a free throw by 6-foot-5 senior Justin Park. Red Mountain will face an athletic Cesar Chavez group in the quarterfinals on Tuesday ...

#2 seed Pinnacle HS (23-9) held off #15 seed Hamilton, 65-57, behind a game-high 22 points (16 in the second half) from 6-foot-1 senior point guard Kevin Bowman. Pinnacle will now face Perry HS in the state quarterfinals on Tuesday evening.