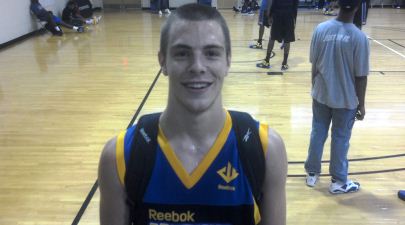 After signing a national letter of intent with Drake University in the fall and then re-opening his college recruitment this spring, Chaparral HS 6-foot-8, 225-pound senior post Joe Boyd has now signed with a program in the Big West Conference.
Share
Facebook Twitter LinkedIn WhatsApp Pinterest Email

While it was planned that Boyd would be headed to Drake University next fall to begin his college career, he is back in the recruiting hunt at a prime time of the year after receiving an official release from Drake on Friday.  Boyd's release from the Drake program comes after former head coach Mark Phelps was released from his duties as the school's head coach recently.  After the school hired new head coach Ray Giacoletti, the new Drake staff attempted to keep Boyd as a player, but Boyd decided to re-open his college recruitment in an attempt to find another program for himself.

I caught up with Boyd on Sunday afternoon and he advised me that he plans to play through the spring evaluation period to improve his college recruitment.  Boyd advised me that he will be playing with the Arizona version of the Compton Magic and head coach Ray Arvisu this spring.

Boyd also informed me that he is currently hearing from Montana, San Jose State and Cal Poly.

"I don't know who else," said Boyd.  "I literally just got my release officially two days ago."

Boyd will hope to revamp his college recruitment, after an end to a sub-par season for himself that was plagued with injuries.  While helping lead his Chaparral team to a 22-8 overall record on the season, Boyd averaged modest numbers for himself - 10.5 points and 8.8 rebounds.

Boyd previously gave an early verbal commitment to New Mexico State during the summer of 2011, before re-opening his college recruitment just months later.

Boyd began to pick up recruiting steam after missing much of his junior season of high school due to injury.  Boyd saw his recruitment pick up last summer, after a strong performance at last summer’s Reebok Breakout Camp in Philadelphia, PA.  He then saw it tail off after a sub-par performance for himself during the remainder of the summer – after the event.

Arizona Preps will continue to follow the recruitment of Boyd closely, and bring you any updates as they continue to develop.

Arizona Hoop Review Scouting Report: Boyd is one of the state’s most skilled and talented post prospects.  A skilled, face-up four man prospect, Boyd is a nice talent that still needs to embrace the four position, but has the ability to play on the low block or face the basket out to three-point distance.  Boyd has really improved his jump shot over the years, and is capable of scoring the basketball off the dribble while facing his defender from the wing.  Continued development in his perimeter shooting stroke will allow him to reach his maximum potential as a player.  A strong and active rebounder when he focuses in on it, but needs to continue to work in this area.  Has excellent low post footwork and a very good overall feel for the game.  A good passer out of the post and is capable of handling the basketball in the half-court set.  Runs the floor very well and is a very good finisher around the basket – his best attribute.  Has good work ethic and loves to improve as a player, something that will fair well for him at the collegiate level - but he needs to remain focused to reach his full potential.  A solid all-around prospect that should continue to improve over time.  A very solid prospect with a college-ready body.