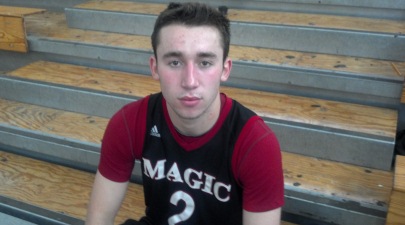 Very few high school players work as hard or as much as Brophy Prep's 6-foot-2 junior guard Romano Bottini.  One of the better guard prospects in Arizona's 2014 class, Bottini worked tirelessly this off-season to raise his game and gain exposure to many college coaches, scouts and media.

When the 2011-2012 high school basketball season ended, Bottini's season had just began.  The hard-nosed guard prospect laced up his sneakers and went to work - working out with a personal basketball trainer, lifting weights and hitting the spring and summer club circuit in hopes of improving his game and raising his level of overall play.

Bottini competed in more than 100+ games this off-season, either with his Brophy Prep HS team or with his club program.  But unlike many players that simply play in games, Bottini also worked hard on his individual basketball skills.  The hard work paid off as Bottini added some size to his once very thin frame, and raised his level of confidence on the basketball court.

During the month of July while in Los Angeles, CA, Bottini was seen competing in both the Double Pump Best of Summer tournament, and also the Full Court Press Cream of the Crop tournament - at the same time.  Bottini would play in as many as 5 games in a single day, jumping back and forth between both events.  Because both events were being played close to one another, Bottini was able to make it happen.

Bottini's endurance was amazing as he competed at the same intense level in both events - an impressive feat.

Bottini is a tough, hard-nosed guard prospect that competes hardest on the defensive end of the floor, where he is often seen defending the opposing team's best player and creating havoc for his opponent.  He always seems to be on the floor diving for loose balls, deflecting passes, and giving opposing guard fits on the court.  Bottini is also a pure shooter of the basketball with a nice, left-handed shooting stroke with nice range.  A shooting guard prospect, as he continues to develop his ability to score off the dribble and shows a better ability to play the point position, he will raise his level of college recruitment.

This past weekend, Bottini packed his bags and took an unofficial recruiting visit to Point Loma Nazarene University in San Diego, CA - a very nice division-II program with an amazing campus.  Bottini enjoyed himself very much while being shown the school's campus.

This season, Bottini will look to carry over his extreme hard work from the off-season to the 2012-2013 basketball season for his Brophy Broncos, where he will suit up for one of the state's elite high school coaches, Tony Fuller.  Bottini will look to provide the Broncos with extreme toughness this season and a deadly shooting stroke from the perimeter.

I will be keeping a close eye on Bottini this season, as he continues his hard work and dedication to the sport.  Look for Bottini to continue his climb into one of the state's better guard prospects in an amazing 2014 class.

Arizona Hoop Review Scouting Report:  Bottini is a strong, very developed athlete who plays the game with great passion and physicality.  Bottini is athletic, quick and has good size and has developed into a very good basketball player. Romano loves to use his physical body to his advantage and is considered one of the top defenders in the state.  He can guard the smaller quicker guards, as well as step in the paint and guard the bigs on the floor.  Bottini has worked very hard on improving his off-hand, as he has always been a crafty lefty that attacks the basket with force.  Bottini has also worked hard on developing his outside game and look for him to continue to improve, as he is relentless at working on his weaknesses.