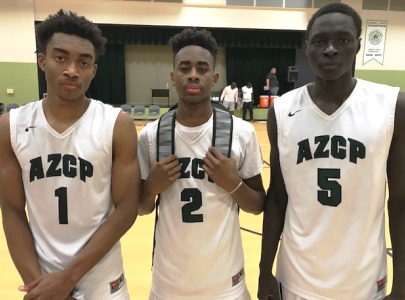 AZ Compass Prep's National Team is very talented in their first season.  After coming back from their biggest test of the season, where they faced a gifted Findlay Prep (NV) team, which resulted in a loss, the team was ready to get back to business in a local prep match-up at home with CGM Prep Academy on Tuesday evening.

CGM Prep Academy is a new prep program in Arizona, that features (7) different post-graduate teams - compiling close to 100 different student-athletes in their program.  Led by Greg Strickland, Derrick Ulrich and former division-I basketball coach and player Tony Miller, the program is off to their first season.  The program's national team is very talented, but would be missing the services of a few players on the night due to the holidays.

Both teams would come out intense on both ends, but CGM Prep would get it going early offensively behind the sharp-shooting from 6-foot-3 junior guard Connor Murphy.  Murphy would fire off consecutive three-pointers to give CGM Prep a quick 9-7 lead in the contest.

With 13 minutes left to play in the first half, 6-foot-6 unsigned senior Both Gach would take the baseline around a defender and throw down a monster dunk - giving his team a 16-13 lead, but Connor Murphy would come right back to tie the game with another three-pointer for CGM.

Late in the first half, AZ Compass head coach Ray Weathers and his staff would make some key substitutions for their team, which would include 5-foot-10 sophomore guard Keyson Upchurch.  Upchurch would ignite the team's offense with a three-pointer and a floater in the lane.  The inspiration created by the tough, hard-nosed play of Upchurch would get the AZ Compass offense going.  After a baskets by Goch and 6-foot-3 senior guard Dwayne Walker, Compass would build their lead to a 14-point margin, 47-33, with 2 minutes left to play.

Walker would play very consistent in the game, following up his recent 40 point performance in his team's loss to Findlay Prep. AZ Compass would take a 52-39 lead into halftime.

The second half would absolutely belong to AZ Compass Prep, as dunks by 6-foot-7 senior post Stephon Gabriel and Both Gach would get the home crowd going, and allow AZ Compass to blow things open.  After consecutive three-pointers from Walker and Gach, AZ Compass would take a 66-47 lead with 15 minutes left to play.  Back-to-back three-pointers from terrific sophomore guard Jalin Anderson would push the Compass margin to 23 points, 74-51.

While the guard play of 6-foot-2 senior guard Mike Rogers, the sharp-shooting of Connor Murphy and the versatile performance of 6-foot-8 senior post Abdou Ndiaye would keep CGM close late, AZ Compass would cruise to a big 113-91 victory.

Both Gach would finish the contest with a game-high 30 points in the win, while Dwayne Walker would pour in 22 points.  Sophomore guard Jalin Anderson would also finish with 23 points.

Recruiting Notes:  AZ Compass Prep 6-foot-6 senior wing Both Gach is among the elite performers in the West and is among the most under recruited prospects in America.  His length, athleticism and skill level are superb and he has an excellent feel for the game, which a very humble approach.  He is also extremely versatile - capable of playing several positions on the floor, and plays with a high motor and competitive spirit.  Look for his recruitment to begin to heat up soon, heading into the spring.  The University of Oklahoma and Nevada have been the two latest schools to express serious interest . . .

CGM Prep 6-foot-8 senior post Abdou Ndiaye is a big-time talent and another serious unsigned recruiting target for the 2018 class.  Ndiaye is among the best overall defenders and shotblockers in the West, and possibly the country.  He has excellent length of body and great timing.  He runs the floor like a guard and plays with very good intensity.  He is also an excellent finisher and has a deceiving overall skillset.  This young man is among the best overall sleepers available in the West, and should garner loads of recruiting interest this spring . . .

CGM Prep 6-foot-7 senior forward Noel Ntang is an very intriguing prospect as well.  He has good versatility and is able to play both post positions - playing much bigger than his size suggests.  Ntang has a very good overall skill level and is able to score inside and out.  He is also an active rebounder and shotblocker.  A good overall sleeper prospect that should garner mid-major interest over time.