Boothman’s 34 Lifts Buckeye Past Shadow Mountain in 4A Playoffs 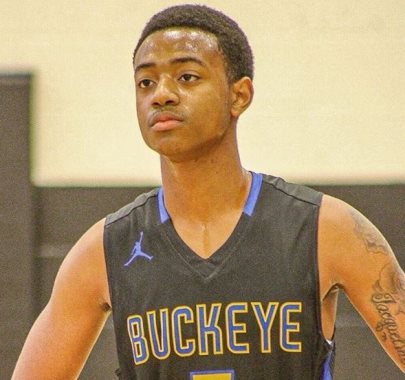 It was a showdown between two of the top unsigned prospects in Arizona's senior class, as Buckeye High School's skilled 6-foot-1 senior point guard Tay Boothman (pictured) faced off against Shadow Mountain's talented 6-foot-4 senior guard Shemar Morrow in the first round of the 4A State Playoffs.

Buckeye (24-4) has had an excellent season and entered Tuesday night's first round state playoff match-up as winners of (7) of their last (8) games on the season. Shadow Mountain (15-9) was looking to advance and have a chance to win their 5th consecutive state title, but the road would have to continue by winning on the road against one of the top 4A teams in the state. The game would primarily be decided by the performances of Boothman and Morrow. Both prospects had played together on an all-star team this summer, and knew each other's gifts and talents very well - making for a very exciting contest.

Both teams would come out slowly in terms of intensity level, as both teams looked to feel each other out. 6-foot-8 junior post D'mari Johnson would give Buckeye an early advantage with his play inside against the smaller Shadow Mountain group, but Shadow Mountain would keep pace behind the play of Morrow early. A Morrow three-pointer with 2:55 left to play in the first period would give Shadow Mountain a 17-12 advantage. Leads would be very difficult to come by in this contest, and after two-consecutive three-pointers from talented 5-foot-10 freshman guard Matthew Henry-Harrison, Buckeye would finish the first period with a 20-17 lead.

Boothman would really get it going in the second period, and he would convert a three-point play after being fouled, quickly in the second period. Boothman would then knock down a three-pointer in Buckeye's secondary break, and then come right back with another driving layup around a defender. Boothman's scoring outburst would give Buckeye a 28-21 lead with 5:21 left to play in the first half.

Shadow Mountain would hang tough, but after consecutive baskets by Buckeye's 6-foot-2 senior guard Clyde Brown, Buckeye would take a 38-32 lead into the half. Boothman would lead all scorers with 14 points at halftime.

In the third period, Buckeye would keep the lead throughout the period, but Morrow would keep Shadow Mountain in the hunt. After a missed dunk by Morrow in transition, he would collect his own rebound and finish the play. Then, immediately following, with 1 minute left to play in the period, Morrow would collect another offensive rebound in transition, and finish the play - tieing the score at 52 all. With :15 seconds remainning in the period, Morrow would again finish a two-handed dunk on the break. Buckeye though would hold on to a narrow 55-54 lead heading into the final period.

In the fourth, the overall intensity level of the game would heat up. Shadow Mountain would finally take the game's lead early in the period, 56-55, after a two-handed dunk on the break by 6-foot-4 junior forward Elijah Cole, assist from Morrow.

But Morrow's tremendous outburst would only be a calling-call for Boothman to get it going for his team. A drive and mid-range pull-up in traffic from Boothman, would give Buckeye a 61-58 lead.

But the 4-time defending state champs would not go down without a serious fight. A three-pointer from Morrow would tie the game at 61 all. Then another two-handed dunk on the break from Elijah Cole would give Shadow a 63-61 lead with 4:01 left to play. With 2:01 left to play in the contest, Morrow would tap in a missed shot after a steal on the inbounds, and Shadow would take a 68-65 lead.

After a transition layup from Boothman and a pair fo Buckeye free-throws, Shadow would take a narrow, 71-69 advantage, after a big three-pointer from the corner by 6-foot-4 senior shooting guard Jimmy Williams.

But Boothman would not be denied. After making 1 of 2 free-throws after being fouled, Buckeye would collect a turnover by Shadow Mountain with less than a minute let to play, and Boothman would convert a layup in transition - giving Buckeye a 72-71 advantage with just seconds remainning.

Shadow Mountain would take a desparation three-pointer late, but after a missed shot, Buckeye would collect the rebound and get fouled. After two clutch free-throws from 6-foot sophomore guard Jayson Redhouse, Buckeye would finally win the game, 74-71, and end Shadow Mountain's hopes of winning their fifth consecutive state title.

Tay Boothman would lead all scorers with a game-high 34 points in the win, while Shemar Morrow would finish the game with a team-high 27 points in the loss.

Buckeye will now advance to the 4A State Playoff's second round, where they will now travel to Tucson to face a tough Salpointe Catholic team on their home floor.

Recruiting Notes: Buckeye High School's unsigned 6-foot-1 senior guard Tay Boothman is among the best unsigned recruiting targets in the state. While his recruitment was very hot a year ago, Boothman, mysteriously, is still unsigned, but should receive his share of college recruitment this spring. Currently, Boothman lists offers from Northern Arizona, Central Arkansas, Denver and Houston Baptist, but he has yet to make a college decision, and previous coaches that extended offers to him from each of the college programs have moved on in their recruiting process or have changed jobs.

Boothman is a sure-fire talented prospect with a pure shooting stroke and a slick handle of the basketball. He can play both guard positions on the floor, and is also a very good defender with quick hands and feet. Boothman is also a tough kid and a true competitor. An excellent sleeper guard prospect for a low to mid-major division-I program. I will continue to follow his college recruitment as the spring recruiting period approaches closely.