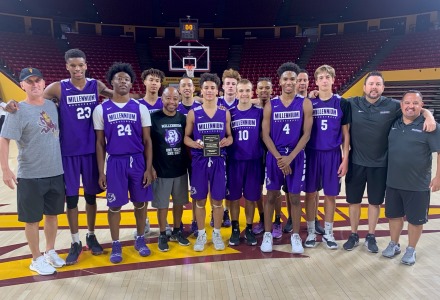 Arizona State men’s basketball Head Coach Bobby Hurley hosted the 4th Annual Bobby Hurley Basketball Camp on the campus of Arizona State University over the weekend. The Team Camp, which ran from Friday, June 28th until Sunday, June 30th, hosted both prominent high school and club teams throughout the West Coast with the opportunity to participate in live games. Teams from the state of Washington, Nevada and, of course Arizona, all competed against one another on the big stage of the premier Division-I program.

Over 62 teams competed during the three-day event, from (6) different states - all under the watchful eye of Coach Hurley and his staff, including newly minted assistant coach, Eric Brown.  The camp featured teams from Arizona, California, New Mexico, Nevada, Washington and Texas.  Hurley and his staff had to come away fairly impressed with the camp, as Arizona continues to climb the national ranks when it comes to elite high school basketball players. Whether it be home-grown talent, or out-of-state prospects looking to join powerhouse programs such as Hillcrest Prep, Bella Vista Prep, AZ Compass Prep or the new prep programs, Dream City Christian Prep or PHH Prep, it’s no secret that the state of Arizona is becoming home to elite-level talent.

Highlights from the weekend included hard fought games between Cesar Chavez and The Show Academy, as well as AZ Compass Prep against Paradise Honors.

Loaded with talent from the star play of Frankie Collins and Devontes Cobbs, AZ Compass seemed overwhelmed and unable to combat the rebounding from dynamic forwards Kiran Oliver and Jerry Iliya of Paradise Honors High School. The explosiveness of Iliya and unreal leaping ability of Oliver were on full display that resulted in a 60-40 win over AZ Compass in the quarterfinals of the camp, which was surely the surprise upset of the weekend.

Whle only playing with (7) players, Cesar Chavez was able to overcome the star talent of The Show Academy (an all-star team formed for the camp), with the efficient offensive play of 6-foot-4 rising junior do-it-all guard TyTy Washington, who of which received an offer from ASU at the conclusion of the camp. Overall, Chavez played collectively better as a team all while being led by their star player, Washington.

Sunday’s championship game saw Cesar Chavez and Millennium HS of Goodyear face off on the main court @ Wells Fargo Arena, while coach Hurley looked on. The limited rotation of Cesar Chavez finally caught up to them, as they ran into a very deep Millennium team. Where Chavez had played much of the weekend with only (7) players, Millennium showed its effectiveness through its depth, sometimes playing up to (10) players.

Players that led the way for Millennium were talented rising junior point guard, Justus Jackson and 6-foot-9 star rising junior forward DaRon Holmes. Holmes was especially impressive over the course of the weekend, showing great ball handling ability for a big-man, accompanied by a great mid-range game. Millennium (pictured) went on to beat Chavez 56-39, becoming the champions of the 4th annual camp.

Ultimately the camp was a major success, providing a notable platform for elite West Coast talent to compete against one another, in front of college coaches and prominent scouts. Coach Hurley and his staff must have liked what they saw over the weekend, as ASU went on to provide offers to both Cesar Chavez guard, TyTy Washington, and AZ Compass Prep's stud rising sophomore guard, Devontes Cobbs, and promising rising junior wing Maxwell Lewis.

Arizona has proven once again that it is becoming a household name when it comes to basketball, and will only continue to get better in the years to come.