Blacksher, Graham Lead Team Why Not To Peach Jam Finals 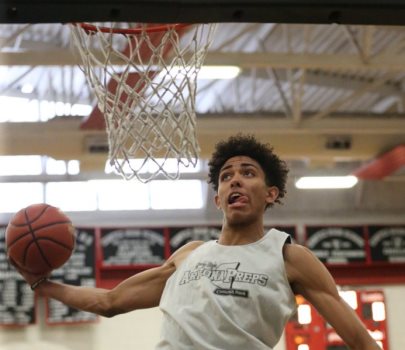 The month of July could not have gotten off to a better start for two of Arizona's elite prospects - Shadow Mountain's rising senior guard Javon Blacksher and Mountain Pointe's senior post Jalen Graham.  The two prospects led Nike-sponsored Team Why Not to the finals of this year's Nike Peach Jam on ESPN.  As a result, both prospects should see a nice improvement in their overall college recruitment.

Blacksher already has seen a nice level of college recruitment for himself, but he is definitely worthy of more recruitment for himself.  Blacksher currently has offers from many schools already, as he has offers already from Colorado State, Toledo, Pacific, Boise State, Dayton, Grand Canyon, UC-Davis, Cal State Northridge, Northern Colorado, Fresno State, North Dakota and Portland State.  Blacksher has yet to receive an offer from a high-major division-I program, but it could be coming now after his performance in last weekend's Peach Jam.

The biggest winner of the two though will definitely be Graham, as his college recruitment has yet to really take off.  Graham recently received his first offer from Grand Canyon University, and now many more schools will now look to be in the hunt of Graham.  Graham is a top-rated prospect that many have yet to see play as of yet, until last weekend when he competed on national television in the Peach Jam - catching the attention of many college coaches in attendance and watching on television.

Since his performance this weekend, Graham has laready received calls from such schools as Arizona and Loyola Marymount, just to name a couple.  Look for Graham, who is working hard in the classroom to improve his academic performance, to see his college recruitment begin to soar the remainder of the summer.

I will keep a close eye on both prospects as they both look to build on their recent success the remainder of the month.