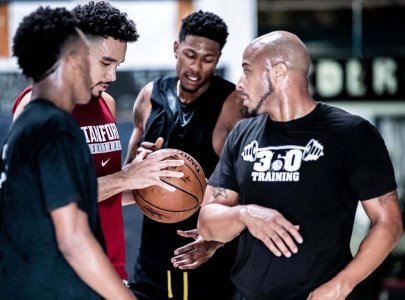 Local Scottsdale-based trainer BJ Letcher is well known in the state of Arizona amongst basketball enthusiasts for being one of the best overall trainers and developers of talent in the state. Over the past (17) years, Letcher has become a household name in Scottsdale, Arizona, in basketball circles, as he has worked to develop hundreds of players, while managing his own facility – 360 Hoops. A former college and professional player, Letcher moved to the state of Arizona after his playing career concluded in 2003, and, since moving to the state, has built an excellent training option for Arizona prospects, while also operating a competitive club program.

The training aspect in sports has increased in importance for today’s student-athletes considerably over the years, as players look to improve their ability to play the game and perform at higher levels. As a result, the industry has grown by record numbers as more and more trainers in the state have developed over time to meet the demand for trainers by players. But there are only so many top-rated performers to go around, and Letcher has consistently trained his share of the best talent the state has to offer – developing such top performers as Paul Watson (Fresno State), Dorian Pickens (Stanford University), Carrick Felix (Arizona State), Joe Boyd (San Jose State), Josh Braun (Grand Canyon University) and Spencer Rattler (University of Oklahoma), just to name a few.

Letcher played competitively at Barton County JC (KS), before finishing up his college degree at Central Washington University, where he earned his Bachelor of Arts (BA) in Business Administration. Letcher then decided to move to the state of Arizona after his professional career ended abruptly, and build his basketball business. Letcher first joined the Arizona Magic organization in 2003, where he coached such top-rated talents as Carrick Felix (Cleveland Cavaliers) and James Ellisor (NCAA National Player of the Year). Letcher would coach in the Magic program for (2) club seasons, before deciding to increase his training business and work out more kids. As a result, Letcher would take over a facility in North Scottsdale from another top-rated Scottsdale-based trainer Padraig Obrien, and name it 360 Hoops.

Letcher has now operated the 360 Hoops workout facility for (8) years, and has made his gym into one of the most successful gyms of it’s kind in the state. While the gym has been a tremendous success, it wasn’t easy for Letcher to build such a successful model. Over the past (8) years and while looking for ways to meet his monthly rent expense and gain momentum in his industry, Letcher worked hard daily to train players individually at his gym, while also trying to attract more high profile student-athletes to his gym. For any trainer in this state, in any sport, it is difficult to pay overhead expenses monthly before the desired revenue number is generated. For Letcher, it was not easy, but he was able to figure it out for himself.

“It was really hard,” said Letcher. “There were some tough months, but I always hung in there, because I knew I had a good product.”

Letcher’s ability to play the game at a high level himself, and also his ability to develop other players, utilizing the same drills that helped him become a pro, worked very well for Letcher, as he began to help student-athletes achieve college scholarships through his club program the Arizona Aces. Letcher developed the Aces as a competitive option for Arizona’s lesser known basketball prospects in 2007, and organized the program for (10) years, before changing the name to Zone 6 in 2017. Letcher has now operated the Zone 6 program for the past two years, and has grown the organization to as many as (23) teams, comprised of boy and girls from the ages of 2nd through 8th grade, and also high-school aged boys and girls.

While Letcher has built a very respectable program in the state of Arizona, and continues to develop more and more of Arizona’s top athletes, he is one of the few people in Arizona at his level that are willing to help others, regardless of whether a student-athlete is in his program. He keeps it real with all basketball prospects, boys and girls, and regardless of whether a kid plays for him or not, Letcher’s focus is the kid, not himself or his own personal gain.

“It is just my passion to help kids,” said Letcher. “I’ve helped more kids off the court then on the court. Many kids that I have worked with don’t even play for me. Letcher went on to say, “My ultimate goal when I started was to build something that could help my friends, players and family.”

Letcher embodies the attitude and mindset that is needed today in a growing Arizona basketball culture, as there is a huge need in Arizona to work together and help those that need the help – not for personal gain, but rather for the betterment of the student-athlete. Letcher has never had any beef with anyone in the state. While many in the Arizona basketball community seem to be always fighting amongst each other, Letcher continues to flourish in his niche market in North Scottsdale – focusing on the things he can control, his craft.